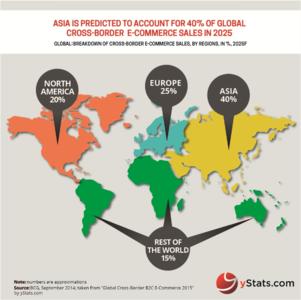 (PresseBox) ( Hamburg, 15-08-14 )
"Global Cross-Border B2C E-Commerce 2015", a new report by Hamburg-based secondary market research company yStats.com, unveils the great potential of cross-border online retail worldwide. According to the report, the value of purchases made directly by online shoppers across the national borders is predicted to see double-digit growth rates over the course of the next five years.

Cross-border B2C E-Commerce is expanding worldwide. It is projected to see accelerating growth rates until 2017 and then decline slightly, while still maintaining double-digit growth figures. Global online shoppers are motivated to buy directly from foreign online merchants due to better product availability and prices, while among the major hindrances to cross-border purchases are customs charges, higher shipping costs and longer delivery times. Clothing and footwear succeeded as the product category most purchased by cross-border online shoppers across all global regions last year.

Asia-Pacific is predicted to become the largest region in global cross-border online retail, reaching a share of approximately 40% of all cross-border sales in the next years. China is an important country for both cross-border online imports and exports. Close to a third of active online shoppers in China have made purchases across borders, and China-based E-Commerce marketplace AliExpress of Alibaba Group is a popular destination for online shoppers in countries such as Brazil, Russia and others. Alibaba's competitor JD.com also strives to participate in the cross-border boom, having opened a global marketplace for overseas merchants to sell to China and having launched a website targeting Russian online shoppers.