Europe of Different Speeds: B2C E-Commerce sales growth rates vary across the old continent, according to a new report by yStats.com 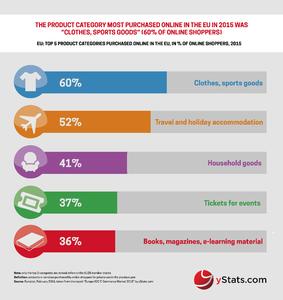 (PresseBox) ( Hamburg, 16-03-07 )
According to yStats.com’s CEO and Founder, Yücel Yelken, “The United Kingdom, Germany and France remain the top three B2C E-Commerce markets in Europe in terms of sales value, but some emerging Eastern European markets outpace them in terms of growth rates.”

Europe is one of the largest B2C E-Commerce markets worldwide, a new report by yStats.com reveals. This region is home to two of the five highest ranking countries globally in terms of online retail sales. These two markets, the UK and Germany, accounted for nearly half of the region’s B2C E-Commerce sales and had some of the highest online shopper penetration rates in the region in 2015. France was Europe’s third leading country in B2C E-Commerce sales, likewise benefiting from a high double-digit online shopper penetration rate. Due to these markets being in advanced stages of development, their sales growth rates are predicted to be more moderate compared to the rapid growth of emerging B2C E-Commerce markets such as Turkey and Poland.

Some common characteristics emerge in the various online retail markets across Europe, including the increasing importance of mobile and cross-border shopping, yStats.com’s report reveals. For example, in Italy, M-Commerce’s share of total online retail sales is projected to more than double through 2017, and in Russia, China-based cross-border shopping websites are gaining popularity each year. Another market trait shared by many countries in Europe is the leadership of clothing as the product category purchased by the highest share of online shoppers in 2015.

The competition landscape in European B2C E-Commerce features both international and local companies. Amazon has remained one of the market leaders in terms of sales and website visits in the region’s major countries for the past several years. Due to the popularity of the clothing category, online fashion retailers, such as Germany-based Zalando and Bonprix, UK-based Asos and Russia-based Wildberries, have also kept high ranks in their markets of operation. Overall, the report by yStats.com shows that competition remains intense as some of the European B2C E-Commerce markets mature, while others continue to grow rapidly.

Dass es gehen könnte, zeigte bereits der erste Corona-Lockdown vergangenes Jahr: Allein Deutschland emittierte bis Ende April 2020 laut Statista 16 Prozent weniger Kohlenstoffdioxid im Vergleich zum Vorkrisenniveau. read more
The publisher indicated in each case is solely responsible for the press releases above, the event or job offer displayed, and the image and sound material used (see company info when clicking on image/message title or company info right column). As a rule, the publisher is also the author of the press releases and the attached image, sound and information material.
The use of information published here for personal information and editorial processing is generally free of charge. Please clarify any copyright issues with the stated publisher before further use. In the event of publication, please send a specimen copy to service@pressebox.de.