WITTENSTEIN's transformation into a digital enterprise 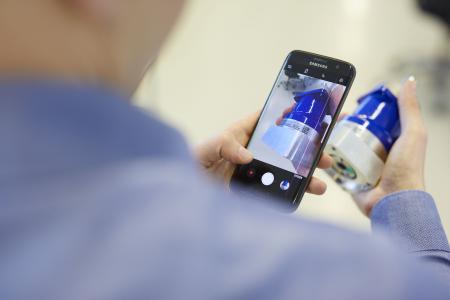 (PresseBox) ( Igersheim, 19-04-04 )
The WITTENSTEIN Group is profiting from the know-how of its own Digitalization Center – with 30 or so sensor, electronics, software, data and cloud specialists Group-wide – and the broad digitalization expertise of the Industry 4.0 shop window factory in Fellbach to actively shape its own transformation into a digital enterprise. The digitalization strategy which has been developed for this purpose is based on a holistic approach that places an equal focus on four topics: the digitalization of the WITTENSTEIN product world, digitalized production of the future, digital customer interaction and the integrative design of a digital work and management culture at WITTENSTEIN.

“The roadmap and its various milestones consider the medium to long-term perspective”, explains Patrick Hantschel, Manager of the WITTENSTEIN Digitalization Center. “As we make the transition from a drive manufacturer and mechatronics corporation to a ‘Leader in Cybertronics’, this helps the company and its employees to shape the digital transformation in a controllable way.”

Mechatronic drive systems that can collect and communicate information independently are fundamental to the implementation of Industry 4.0. WITTENSTEIN products and drive solutions are increasingly smart as a result and regularly expanded with suitable digital services for the Internet of Things and the cloud. The development of smart gearboxes with the “cynapse” feature – in other words, with integrated sensors that enable secure and future-proof Industry 4.0 connectivity using an IO-Link interface – is one example that illustrates what form this could take in practice.

A prompt, flexible and economically viable response to each customer’s wishes in the Smart Factory is the goal of digital production at WITTENSTEIN. The networked, virtual factory is intended to ensure transparent, responsive and individual manufacturing and assembly – in extreme cases with mass customization within the cost structures for normal serial production of mechatronic drive solutions. “Digital data will undoubtedly improve the effectiveness of manufacturing processes, for instance by reducing the response and lead times of networked production systems”, Hantschel adds.

In sales, digital touchpoints like the scalable sizing tools WITTENSTEIN has already established in the market as a pre-sales service turn the search for the right product into a successful customer experience. The relationship with WITTENSTEIN as a supplier is filled with positive emotions, with significant impacts on selection and purchasing behavior. Digital touchpoints enable sales and earnings to be increased more efficiently and – compared to other, classic measures – disproportionately.

Digitalization is closely related to a change in people’s values, ideas and needs – and the people who work for the WITTENSTEIN Group are no exception. The establishment and continuous development of a digital work culture, with human beings at the center, is therefore a key component of the holistic digital transformation taking place at WITTENSTEIN. The digitalization strategy stands for a long-term, people-centered path which demonstrates the specific opportunities arising from digitalization for each employee and provides them with guidance for dealing with the changes. WITTENSTEIN encourages an open-minded attitude towards new departures, not only at employee level but also among the management. In this mindset, risks and mistakes are also interpreted as opportunities: decisions based on assumptions and proven facts make way for personal experience according to the trial-and-error principle – for example, when developing new business models.

The digital transformation: an opportunity with no alternative

The digital transformation is an economic and social change process which is also a catalyst for profound changes in the engineering industry. In industrial applications, digitalization makes it easier to understand complex systems, enables work steps to be networked together without media gaps, gives rise to even higher-performance industrial processes and drives the development of new, digital business ideas. “Particularly for mid-market manufacturers of capital goods like WITTENSTEIN, digitalization’s biggest potential lies in the increased efficiency and added value of our own products as well as in the development of smart products, additional services and derived business models”, says Hantschel. “Digitalization is an opportunity for the future – and an opportunity to which there is no alternative.”

With around 2600 employees worldwide and sales of €385 million in 2017/18, WITTENSTEIN SE enjoys an impeccable reputation for innovation, precision and excellence in the field of mechatronic drive technology - not just in Germany but internationally. The group comprises six pacesetting Business Units with separate subsidiaries for servo gearboxes, servo actuator systems, medical technology, miniature servo units, innovative gearing technology, rotary and linear actuator systems, nanotechnology and electronic and software components for drive technologies. Through its 60 or so subsidiaries and agents in approximately 40 countries, WITTENSTEIN SE (www.wittenstein.de) is additionally represented in all the world's major technology and sales markets.

Innovative, digital and - at long last live - in person again: WITTENSTEIN at sps 2021