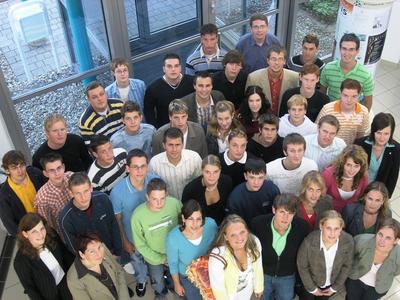 (PresseBox) ( Igersheim, 06-09-27 )
WITTENSTEIN AG can look back on a successful fiscal year: the Igersheim-based mechatronics specialist was able to boost its sales in 2005/2006 by 14.8 percent to a record 133 million euros. The strength of the Group's unbroken upward trend is underlined by a series of statistics: our export rate rose by three percent to sixty percent, the 1000th employee recently joined the company and construction of a sixth production shop commenced in August this year on the site of the head office in Igersheim-Harthausen, Baden-Württemberg. WITTENSTEIN also set a new record when it came to training: for the first time, 100 young people are simultaneously striving to achieve their professional qualification at WITTENSTEIN AG. Starting in 2007, an additional 15 urgently needed sales engineers will embark annually on a specially devised training course sponsored by the innovative machine builder at the nearby Professional Academy.

In the last fiscal year (FY 2005/2006, which ended on March 31, 2006), the WITTENSTEIN Group continued to grow faster than the average for all member companies of the German Engineering Federation (VDMA). VDMA companies they recorded a turnover plus of around six percent in 2005. Outperforming this figure is a central objective of WITTENSTEIN AG, so that a solid foundation has already been created for the future: once again, the Group achieved two-digit growth of 14.8% (2004/2005: +16.3%) with a broad product portfolio - in all technology fields and regions wherever systems and parts have to be driven and controlled with utmost precision. Business expanded most rapidly in Asia and Europe; the company's overall export rate is now 60 percent.

100 new employees - WITTENSTEIN team welcomes its 1000th member The WITTENSTEIN Group and its 23 subsidiaries worldwide meanwhile employ a workforce of 1000. The total has risen from 908 in the 2004/2005 fiscal year. The 1000th member of the WITTENSTEIN team is 34 year-old Michael Schwarzbach, a development engineer with our innovative WITTENSTEIN cyber motor GmbH company. His work spans a fascinating sphere of activities and could be considered symbolic of the fitness of the Group as a whole to master future challenges.

WITTENSTEIN cyber motor GmbH (WCM) manufactures miniaturised, heavy-duty AC servo drives. Cyber motors are used in a wide variety of locations, for example in the aerospace sector, robot systems, the semiconductor, packaging and woodworking industries, medical technology or pharmaceuticals when only limited space is available. WCM has developed a new series of high-performance AC servo drives for extreme requirements: motors designed for insulation classes F to C, in other words for temperatures up to 300°C. Radioactivity and high-vacuum applications are also no problem for cyber motors. The number of trainees increased yet again in 2006. A fresh intake of 39 young people commenced their training at WITTENSTEIN AG on September 1 this year. The company now employs 100 trainees in total which, at around 11.4 percent of the workforce, is a much higher proportion than in the majority of medium-sized companies. WITTENSTEIN AG's one hundredth trainee additionally marks the entry into a new professional domain: this young man will eventually qualify as an electronic engineer for aviation systems before launching out on a career with WITTENSTEIN aerospace&simulation GmbH.

WITTENSTEIN honoured for its pioneering role in ethical business At the end of the last fiscal year, WITTENSTEIN AG received the "ETHICS IN BUSINESS" quality award for the outstanding commitment demonstrated by the company in the field of social and environmental issues. The award was presented in the framework of the first national comparative study undertaken by oekonom research AG to SMEs which operate to standards of honesty and sustainability beyond the demands made by law.

Forecast for fiscal 2006/2007 Building on the twin mainstays of the company's success - technological expertise and a tradition of innovativeness - WITTENSTEIN AG again anticipates breaking its sales record within the current fiscal year. With its fundamental orientation towards intelligent, mechatronic drive systems and a blend of micro and macro technologies, the company will continue to develop its core know-how and competencies. WITTENSTEIN's current range of products extends from high-precision gear wheels and low-backlash planetary gearheads through to complete electromechanical drive systems and dynamic AC servo systems and motors. Typical product applications include robotic systems, machine tools, the packaging industry, materials handling and process engineering, Formula 1 racing, paper and printing presses, medical technology, machine room-less elevators and the aerospace sector.

To identify, and in some cases set, trends in the development, production and sale of components at an early stage: WITTENSTEIN remains unswervingly committed to this concept, reiterated by the recently inaugurated alphira® Internet shop - the only sales channel of its kind in the world for planetary gearheads. A success strategy that is an integral part of a package is thus maintained: 85 percent of WITTENSTEIN products are less than five years old. Every tenth euro is spent on, and 12 percent of employees engaged in, research and development.

Growth on this scale takes up a lot of room: Harthausen's sixth production shop will be completed and ready for occupancy at the end of January 2007. The extra space is urgently needed and it too will be embedded in the newly opened WITTENSTEIN World Garden - probably the only botanical garden on the premises of a machine building company.