WITTENSTEIN AG: "We will continue to grow" 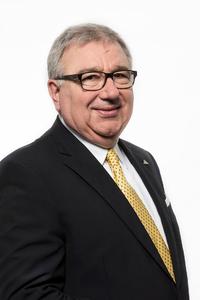 (PresseBox) ( Igersheim, 14-04-10 )
At the end of his first few months in office WITTENSTEIN AG's new President Professor Dieter Spath, who took over as successor to Dr. Manfred Wittenstein last October, is looking confidently ahead to the future: "We will continue to grow owing to our innovative vitality". Dr. Wittenstein stepped down from the WITTENSTEIN Management Board as planned on March 31, 2014 and "switched" to the Supervisory Board as Chairman with effect from April 1.

Speaking to journalists at the Hanover Fair, Professor Spath, aged 61, described his move back from academia - where he previously spent many years as Head of the Fraunhofer Institute for Industrial Engineering (Fraunhofer IAO) in Stuttgart - to industry as an "attractive and interesting challenge". As a proven technology manager, he is determined to intensify the Group's systematic specialization in mechatronic solutions. The new WITTENSTEIN Innovation Factory is a visible symbol and an important milestone on this ambitious path. This 35 million euro investment is due to be officially opened at the end of May.

The new building at the WITTENSTEIN headquarters in Igersheim-Harthausen underlines the company's clear future commitment to Germany as a manufacturing location as well as the unbroken pursuit of its growth and success strategy, which is founded on a tradition of innovation - not only in the portfolio of drive products but also in production processes. "WITTENSTEIN is in great demand as a recognized driver of Industry 4.0 in Germany - even though with our 1800 or so staff we can hardly be classed as a large corporation". He intends to utilize his longstanding experience and network ties in applied, industry-relevant research to thrust ahead with the technology shift from mechanical engineering to mechatronics. Software and electronics are two key aspects of the envisaged advances in drive technology. Spath - who studied Mechanical Engineering, specializing in manufacturing systems and production engineering, and can look back on significant successes in industry in addition to his impressive biography as a research scientist - is a staunch advocate of "tomorrow's smart production". It therefore comes as no surprise when he mentions the "Future Urban Production" facility, which opened not quite two years ago at the Fellbach site a few miles from Stuttgart, in the same breath. This low-noise, low-emission manufacturing plant for gearing solutions, which is closely aligned to tomorrow's challenges as identified within the Industry 4.0 project - the "fourth stage of industrial development" - went up directly adjacent to a passive house estate. Spath is altogether aware of the big opportunities offered by Industry 4.0: "It's a trend that will open up new product worlds and business models - and WITTENSTEIN is no exception".

By his own admission, WITTENSTEIN's "new man" has now reached the end of the stocktaking phase. During these first few months at the company he has been concerned above all with understanding its market and competitive position from the point of view of the underlying technologies and opportunities for development. As part of the groundwork for his future strategic direction, Spath has visited WITTENSTEIN's main international production sites, starting with the US and Romania. He sees particular potential for global growth in the continued expansion of the Asian and American markets.

"Everywhere I've travelled so far, both at home and abroad, I've come across staff who are highly motivated; I don't think I've ever experienced such widespread openness and enthusiasm at any company before", he reported, still just as awed. The strengthening and realignment of vocational and further training in-house at the WITTENSTEIN academy is a matter especially close to heart of the new President, who is a highly reputed occupational scientist. "We can only succeed in fostering talent and getting the best out of our staff if we adapt our programme of training and continuing professional development to the changing requirements of globalization, new technological challenges, novel business and production processes and demographic trends", Spath explained to the journalists in Hanover.

In the meantime, the new President - the candidate expressly favoured by his predecessor Dr. Manfred Wittenstein - has taken over all of the latter's duties. Dr. Wittenstein stepped down from the Management Board (which also includes Karl-Heinz Schwarz in addition to Professor Spath) on March 31, 2014 to coincide with the end of the 2013/14 fiscal year. With effect from April 1, he will support the family owned company in his new role as Chairman of the WITTENSTEIN AG Supervisory Board.

With around 1800 employees worldwide and sales of €250* million in 2013/14 (* provisional figure), WITTENSTEIN AG enjoys an impeccable reputation for innovation, precision and excellence in the field of mechatronic drive technology - not just in Germany but internationally. The group comprises eight pacesetting Business Units with separate subsidiaries for servo gearheads, servo actuator systems, medical technology, miniature servo units, innovative gearing technology, rotary and linear actuator systems, nano technology and electronic and software components for drive technologies. Through its 60 or so subsidiaries and agents in approximately 40 countries, WITTENSTEIN (www.wittenstein.de) is additionally represented in all the world's major technology and sales markets.

Recommend WITTENSTEIN AG: "We will continue to grow" press release