Solo exhibition by Michael Najjar at the WITTENSTEIN Innovation Factory: Beyond the Horizon

Exhibition opening and panel talk on the "New Space Industry" on October 17, 2019 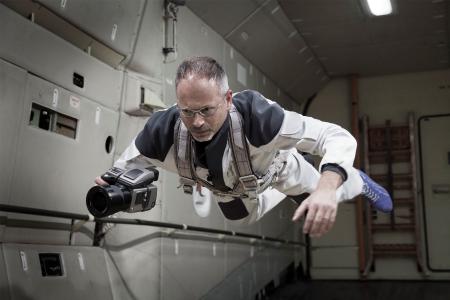 (PresseBox) ( Igersheim, 19-10-21 )
Half a century after Neil Armstrong became the first human being to set foot on the moon, a German photographer is plotting the next conquest of space: Michael Najjar, the internationally renowned artist, adventurer and future astronaut. For many years now, his fascinating, large-scale photo and video works have been exhibited worldwide in galleries and museums or at biennials.

For his new exhibition “Beyond the Horizon” the 53 year old photo artist deliberately chose a venue which is home to his artistic topos, namely technical innovations and their impacts on the future of humanity: the Innovation Factory of mechatronics group WITTENSTEIN SE in Igersheim (Germany). The official opening on October 17, 2019 was preceded by a panel talk featuring distinguished experts, who shed light on current developments in the “New Space Industry” and in particular on the mutually beneficial exchange between science and the arts.

The arts or technology:
The first step is always the innovation


Michael Najjar, born in 1966 in the small south-west German town of Landau, presently lives in Berlin. He may well have found his “alter ego” in Manfred Wittenstein, the restless entrepreneur and patron of the arts. The two men are united by a fascination for technology and the arts. One – Manfred Wittenstein, a 77 year-old engineer – is Past President of the German Engineering Federation (VDMA) and a recipient of several lifetime achievement awards.

Courageous and visionary, he transformed his own family firm into a successful global player for innovative drive technology. A man for whom sustainable entrepreneurship – coupled with a commitment to society – is something to be taken for granted. For whom youth advancement of whatever stripe is a matter of deep concern and who therefore initiated both an international classical singing competition and a regional youth technology learning center.

The other – photographer Michael Najjar – is among the vanguard of artists taking a complex, critical look at the technological forces that are currently shaping and drastically transforming the early 21st century. Whose photo and video works draw from an interdisciplinary understanding of art. Who fuses science, art and technology into utopian visions of future social orders that are spawned by cutting-edge technologies. Who travels to the world’s most remote places in search of new inspiration. Who attends training camps and space programs as part of his meticulous preparation to become the first artist to fly into space. And, as a member of the “Virgin Galactic Pioneer Astronaut” team aboard “SpaceShipTwo”, to focus his camera lens on “Spaceship Earth”. And whose works of art are now the subject of an exhibition in Manfred Wittenstein’s architecturally impressive industrial building on what is literally a “greenfield” site.

Orientation from the outside

Najjar was one of a group of contemporary photographers who were invited to take part Manfred Wittenstein’s “Entrepreneur 4.0 Award” competition in 2014. “Every entrepreneur is essentially a discoverer and a destroyer – yesterday, today and tomorrow. The aim is, and always has been, to replace something old with something new, something good with something better, in a process of creative destruction – in the knowledge that no technology lead lasts forever and that solutions must be continuously evolved into an uncertain future”, Wittenstein wrote at the time in the foreword to the exhibition catalog. He was excited by the conscious shift in perspectives in a confrontation through the medium of artistic photography, by the visual (creative) spaces for other forms of thought and for reflecting on the world in the 21st century: “Artists are the most valuable sounding board for all of our actions and aspirations.”

Perceiving setbacks as an opportunity, anticipating the unthinkable today – evocative images and imagination have the potential to foster public awareness and sensitivity with regard to new standards as well as criteria for action. And this is where Michael Najjar comes in: his works exactly straddle the worlds of science, research and the arts. They are invariably conceptual and media-reflective. Realistic elements are linked with virtual worlds and fictions. The lines between analog photography, digital picture editing and computer-generated image elements are blurred in a new form of expression known as “hybrid photography”, a term Najjar coined himself back in the early nineties.

“Beyond the Horizon” shows how current developments in space research will shape our future life on Earth, moving in orbit or on other planets. The boundaries between the utopian and dystopian worlds are frequently erased and, so it seems, deliberately left to the discretion of the beholder.

The exhibition at the WITTENSTEIN Innovation Factory specifically revolves around technological progress in space travel, which could change our future radically. In addition to 20 large-scale photo compositions from the much acclaimed series of the same name, Najjar’s most comprehensive solo “outer space” exhibition to date – personally curated by the artist – will also include a video installation called “terraforming”. This ten-minute video combines film recordings by the artist (which originated as part of an elaborate production in Iceland) with Martian landscapes shot by the “Curiosity” rover on the “Red Planet”. In a visual dialog, “terraforming” addresses the paradox that Mars could be transformed into an inhabitable environment because, thanks to identical technologies and their impacts, we are simultaneously transforming our home planet Earth into an increasingly uninhabitable one.

Najjar’s approach to artistic photography is as painstaking as it is diverse: for example, he took photographs at Spaceport America, the world’s first privately funded spaceport in the desert of New Mexico, as well as at the European spaceport located at Kourou in French Guiana. In China, he was given the privilege of capturing the largest astronomic radiotelescope on Earth, which has an incredible diameter of 500 meters; this unique instrument searches for alien life and is not normally accessible to photographers.

Another of his works visualizes the space debris which meanwhile orbits the Earth in an alarmingly aesthetic way. In a self-portrait taken during cosmonaut training in a so-called hydrolab in Russia, he added the Earth digitally to the viewer’s perspective on space: the blue globe looking through a porthole questions the relationship between the real world and simulation.

He also reinterprets iconic classical paintings like “The Sea of Ice – The Wreck of Hope” by Caspar David Friedrich (1824): among the exhibits at the Hamburg Kunsthalle art museum, this painting depicts an expeditionary ship crushed between shards of ice and is considered to be the art-historical incarnation of human failure. Najjar turns it into a digital recomposition consisting of many different individual pictures of the Virgin Galactic spaceplane which crashed during a test flight in 2014.

United in a unique way: 12 moonwalkers

Probably the most striking work in the exhibition at the WITTENSTEIN Innovation Factory will be the triptych named “lunar explorers”, which is Najjar’s newest creation: it represents a homage to the first moon landing fifty years ago and the twelve moonwalkers, who, between 1969 and 1972, became the most important explorers of the last century. Previously unprocessed NASA scans of the six Apollo missions served Najjar as source material for this almost mystical triptych in magnificent altar format: “For centuries, fascination with the moon has created an ideal realm in which our imaginations and fantasies about the expansion of human presence in outer space may freely roam. The moon landing was such a tremendously inspirational event because it demonstrated that human beings can accomplish seemingly impossible ventures when they come together and work together for something that’s much bigger than themselves.”

Exhibition opening and panel talk on the “New Space Industry”

The official opening of the “Beyond the Horizon” exhibition on Thursday, October 17, 2019, was preceded by a panel talk featuring distinguished guests. Following a short welcome by Dr. Manfred Wittenstein, Chairman of the WITTENSTEIN SE Supervisory Board, the panel talk got under way with Professor Eckard Minx (Chairman of the Board of the Daimler and Benz Foundation), Professor Reinhard Hüttl (Chairman of the Board of the Helmholtz Center Potsdam, GFZ German Research Center), Klaus Hamacher (Vice Chairman of the Executive Board of the German Aerospace Center DLR), Michael Najjar (photo artist, adventurer and future astronaut). This illustrious exchange was hosted by Lukas Feireiss (curator, author, lecturer and artist).

(Foyer on the first floor plus the second and third floors)

The “Beyond the Horizon” exhibition comprises the following works by Michael Najjar:

A catalog has been produced documenting the exhibition which also exists in digital form:

WITTENSTEIN SE – one with the future

With around 2900 employees worldwide and sales of €436.4 million in 2018/19, WITTENSTEIN SE enjoys an impeccable reputation for innovation, precision and excellence in the field of mechatronic drive technology - not just in Germany but internationally. The group comprises six pacesetting Business Units with separate subsidiaries for servo gearboxes, servo actuator systems, medical technology, miniature servo units, innovative gearing technology, rotary and linear actuator systems, nanotechnology and electronic and software components for drive technologies. Through its 60 or so subsidiaries and agents in approximately 40 countries, WITTENSTEIN SE (www.wittenstein.de) is additionally represented in all the world's major technology and sales markets.

Recommend Solo exhibition by Michael Najjar at the WITTENSTEIN Innovation Factory: Beyond the Horizon press release