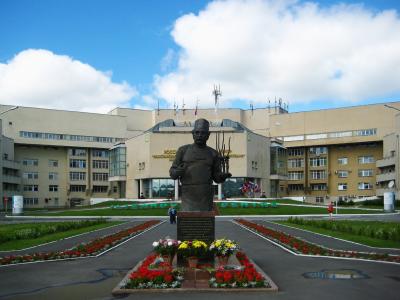 (PresseBox) ( Igersheim, 16-07-07 )
The “ILIZAROV Readings” conference in the Russian city of Kurgan was all about Gawriil Abramowitsch Ilizarov: the pioneer of limb lengthening techniques, who died in 1992, would have been 95 years old on June 15, 2016. The workshop and various presentations on extremity correction with FITBONE®, the fully implantable, intramedullary lengthening nail from WITTENSTEIN intens GmbH, Igersheim / Germany, were among the highlights for more than 500 participants from 25 different countries. Throughout the conference, eminent specialists in the fields of orthopaedics, paediatric orthopaedics and surgery took the opportunity to learn more about the options and methods offered by the FITBONE® intramedullary nail for lengthening and correcting limbs.

Interest among visitors was equally great on the other two days, when large numbers not only turned up at the diverse FITBONE® presentations but also took part in intensive discussions and debates.

An accompanying exhibition by about 35 companies was organized parallel to the official “readings”, and WITTENSTEIN intens took advantage to show its broad portfolio of FITBONE® devices. Attendees from many different countries were able to form their own picture of the compactness and simplicity of the external control electronics; they confirmed FITBONE®’s reputation as one of the most mature and reliable limb lengthening systems in the world. This claim is also backed up by statistical evidence: since the first FITBONE® was implanted back in 1995, the intramedullary lengthening nail – meanwhile in the fourth generation – has been used successfully several thousand times in all corners of the globe.

Kurgan – the cradle of limb lengthening and correction techniques

The ILIZAROV Readings 2016 took place at a historically significant site: the city of Kurgan in south-west Siberia was where Gawriil Abramowitsch Ilizarov (* June 15, 1921 in Białowieża / Poland; † July 24 1992 in Kurgan / Russia) lived and worked. He developed the callus distraction method using external fixators to lengthen limbs and enable bone segment transport. In doing so, he laid the scientific foundation for modern leg lengthening. A museum dedicated to this innovation opened shortly after his death: The Ilizarov Museum contains several thousand exhibits from the life of this groundbreaking Russian physician and surgeon – including, since 2015, a model of the MUTARS® BioXpand growing prosthesis, which is based on FITBONE® and was donated jointly by implantcast of Buxtehude / Germany and WITTENSTEIN intens.

“The exhibit underlines the high esteem in which German engineering is held in the Russian medtech world. We’re delighted to be providing this vital support to WITTENSTEIN intens’ activities in Russia”, explains Vladimir Filonenko, Managing Director of Europe Health East. “The continuous optimization culminating in the present fourth generation, the wide range available, the option of custom-made products tailored to each patient’s individual needs and the mature technology and surgical technique are the main reasons why FITBONE® enjoys such an excellent international reputation. I should also mention the holistic concept at the Centers of Excellence, which lets patients profit from the highest levels of safety and fast treatment free from complications and pain with every operation”, adds Roman Stauch, General Manager WITTENSTEIN intens GmbH, when prompted to sum up the benefits of the concept overall.

Intelligent implants based on miniaturized drive technology are the main focus of WITTENSTEIN intens’ activities. To take just one example: FITBONE® is the world’s only motorized, controllable and fully implantable intramedullary distraction nail for lengthening human limbs. It is used to correct leg length discrepancies and carry out axial and torsional corrections. This mechatronic system facilitates an economical treatment concept characterized by a high level of patient comfort as well as short hospitalization and therapy periods. WITTENSTEIN intens GmbH is one of eight Business Units of WITTENSTEIN AG.

With around 2,000 employees worldwide and sales of approximately €300* million in 2015/16 (*provisional figure), WITTENSTEIN AG enjoys an impeccable reputation for innovation, precision and excellence in the field of mechatronic drive technology - not just in Germany but internationally. The group comprises eight pacesetting Business Units with separate subsidiaries for servo gearheads, servo actuator systems, medical technology, miniature servo units, innovative gearing technology, rotary and linear actuator systems, nano technology and electronic and software components for drive technologies. Through its 60 or so subsidiaries and agents in approximately 40 countries, WITTENSTEIN (www.wittenstein.de) is additionally represented in all the world's major technology and sales markets.