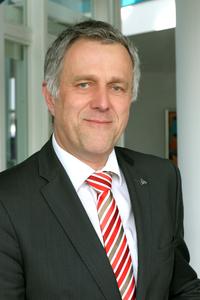 (PresseBox) ( Igersheim, 14-04-28 )
Dr. Bernd Schimpf took over as General Manager of WITTENSTEIN alpha GmbH with effect from April 1, 2014. He succeeds Dieter Derr and Johannes Arnold, who have both left the company. Dr. Schimpf, who can draw on rich expertise and management experience in his new challenge within the WITTENSTEIN Group, previously held overall responsibility for the mechatronic Business Units as Director Mechatronics.

Dr. Bernd Schimpf's new executive function marks a return to his professional roots: born in 1962, he studied Mechanical Engineering at the Institute for Machine and Gear Unit Design at the University of Stuttgart. Following his graduation, he initially worked as an academic assistant for gear units, structural mechanics and information technology.

He began his career at WITTENSTEIN AG in May 2001 as Head of Design Engineering, and subsequently Technical Director, at WITTENSTEIN bastian GmbH in Fellbach, near Stuttgart. In January 2008 he transferred to the company headquarters in Igersheim-Harthausen, where he was responsible for the generating process throughout the WITTENSTEIN Group. In this role he also oversaw all WITTENSTEIN AG's innovation and development activities in the national and international arena. In addition to his duties as Head of Generating Process Management, Schimpf was also entrusted with the management of WITTENSTEIN motion control GmbH. On August 1, 2012, he was appointed Director Mechatronics with overall responsibility for the three mechatronic Business Units: WITTENSTEIN motion control GmbH, WITTENSTEIN cyber motor GmbH and WITTENSTEIN electronics GmbH.

"My team and I hope to build on the company's impressive success story so far - while focusing particularly on the challenges of Industry 4.0 and our objective of further worldwide growth. My experience to date both in the various subsidiaries and at the headquarters of the WITTENSTEIN Group will stand me in very good stead with WITTENSTEIN's oldest family member and help us uphold our commitment to being a world class global partner for the customers of our drive components and systems", said Schimpf when prompted to describe his new career challenge at WITTENSTEIN alpha.

WITTENSTEIN alpha GmbH develops and manufactures drive components and integrated drive systems. Its portfolio includes low-backlash planetary gearheads - of which over a million are currently in action around the globe - servo right-angle gearheads, complete drive units and mechanical solutions for rack-and-pinion systems and coupling connections. In addition to comprehensive engineering, WITTENSTEIN alpha also serves developers and designers in the machine building and drive technology sectors with its cymex® software solution - a powerful web based tool for sizing complete powertrains.

With around 1800 employees worldwide and sales of €250* million in 2013/14 (* provisional figure), WITTENSTEIN AG enjoys an impeccable reputation for innovation, precision and excellence in the field of mechatronic drive technology - not just in Germany but internationally. The group comprises eight pacesetting Business Units with separate subsidiaries for servo gearheads, servo actuator systems, medical technology, miniature servo units, innovative gearing technology, rotary and linear actuator systems, nano technology and electronic and software components for drive technologies. Through its 60 or so subsidiaries and agents in approximately 40 countries, WITTENSTEIN (www.wittenstein.de) is additionally represented in all the world's major technology and sales markets.