The Tower of Superlatives 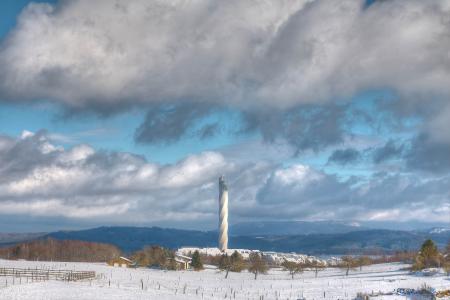 (PresseBox) ( Stuttgart, 18-11-12 )
Record numbers of visitors and a shower of awards: Werner Sobek, who designed the ThyssenKrupp Test Tower together with Helmut Jahn, has impressive results to present after one year of operation.

Record numbers of visitors and prestigious awards - Werner Sobek, who designed the ThyssenKrupp Test Tower in Rottweil together with Helmut Jahn, has impressive results to present after one year of operation. Now Mr. Sobek will receive the German Civil Engineering Award on November 27th, 2018, just one of many prestigious accolades.

Built faster, planned higher and with the most innovative of designs: the ThyssenKrupp Test Tower, which celebrated its first birthday this October, is a structure of sheer superlatives. More than 200,000 visitors have ascended Germany's highest public viewing platform during the first year to enjoy best-in-class engineering together with magnificent views over the Black Forest and the hills of the Swabian Alb, all from a height of 232 meters. With a viewing platform at the top, the Tower has not only become Baden-Württemberg's favourite place to visit; the striking structure has also been recognized by industry experts with several awards during its first year of operation, most recently for example by the selection committee for the German Engineering Award. The engineer and architect Werner Sobek will be awarded the renowned prize in the Stuttgart Staatsgalerie on 27th November 2018.

"The key characteristic of the winning project is that it makes innovative engineering accessible for a wider public audience. This is exactly what we aim to achieve with this prize: bringing impressive feats of engineering to life," commented Horst Seehofer, the Federal Minister of Construction, on the award ceremony for the Test Tower. The building has already been showered with awards during its first year: prizes have included the Balthasar Neumann Award as well as the German Industrial Building Prize, in addition to the German Engineering Award mentioned above. The Test Tower has also been recognized by the German Facade Award for Rear-Ventilated Facades, as well as being nominated for the DAM Prize for Architecture in Germany.

Whilst trade experts come into contact with the Test Tower through international prizes, the public has found their very own use for it: in September 2018 the Tower became the venue for the highest ever tower run held in Western Europe. The building owner, thyssenkrupp Elevator AG, also addresses the unique interplay of research, innovation and public interest on the Test Tower website: "The new Test Tower offers unprecedented opportunities and is brimming with sophisticated technologies and features - providing us with a unique research facility and creating a worthwhile tourist destination for visitors from the local region.

17,000 square metres of fibreglass mesh together with an active pendulum The ThyssenKrupp test tower in Rottweil is used to test innovative high-speed elevators. Special technical features include a textile facade covering an area of 17,000 square meters. This facade both protects the tower from intense solar radiation and contributes to a significant reduction in vibration that would otherwise be generated by the wind. Another special feature is the active pendulum integrated into a cavity, which not only reacts to wind-induced vibrations in the usual way, but can also be set to vibrate in order to simulate real wind or seismic loads.

A Test Tower for more efficient transport solutions within buildings

The development of both innovative engineering solutions and sustainable mobility concepts are of primary concern to Werner Sobek, an engineer and architect who works on projects throughout the world. The future role played by skyscrapers in the design of our cities is of particular importance. The 246-metre high ThyssenKrupp Test Tower enables high-speed tests at up to 64.8 kilometers per hour (18 m/s) to be conducted, to meet the demand for faster and more effective transportation. Among the products tested are rope-free lift cabins, which require significantly less space and are able to carry more people over a shorter period of time.

The international Werner Sobek Group was founded by the entrepreneur himself in 1992 and has become known for engineering, architecture, design and sustainability throughout the world, with approximately 300 employees located in Stuttgart, Buenos Aires, Dubai, Frankfurt, Istanbul, London, Moscow, New York. Each and every project penned by Werner Sobek creates compelling designs on the basis of premium engineering, developing ingenious concepts to minimize the consumption of energy and material resources. In 2015 the engineer and architect Professor Werner Sobek was awarded the Fritz Leonhardt Prize for lifetime achievements and was honored with the Balthasar Neumann Prize

The Desert Rose of Qatar