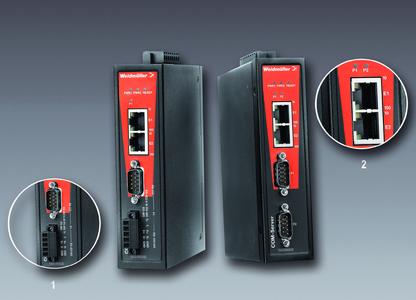 (PresseBox) ( Detmold, 12-01-11 )
Weidmüller's new serial/Ethernet converters integrate devices with serial interfaces in industrial Ethernet networks - simply and reliably. Designed-in functionality protects previous investments in existing automation components. The Ethernet interface of the devices supports a broad spectrum of operation modes such as TCP Server, TCP Client, UDP, Real COM, RFC2217, Reverse Telnet, Pair Connection and Ethernet-Modem - designed-in versatility that guarantees network software compatibility. The converter is eminently suitable for deployment in automated industrial applications in which devices with a serial RS-232, RS-242 or RS-485 interface communicate in an Ethernet network; examples of such devices include control systems, sensors, measuring instruments, motors, drives, barcode scanners and operating status indicators. Two Ethernet ports integrated in the device can be used as Ethernet switch ports - a feature that reduces the costs of cabling, because users no longer need to connect each device to a separate Ethernet switch. Users are also able to implement a cascade connection comprising several serial/Ethernet converters to create an Ethernet network structure that enables uncomplicated access to components with a serial interface, for example via PCs. An integrated web interface allows users to configure all converter functions and Ethernet network parameters in a user-friendly environment.

The serial interfaces RS-232, RS-422 and RS-485 bus standards are widely used in automated technical systems. Serial/Ethernet converters are deployed in order to integrate the corresponding terminal devices such as control systems, sensors, measuring devices, motors, drives, barcode scanners or operating status indicators in modern-day industrial Ethernet networks. Consequently, they protect previous investments in existing automation components. Weidmüller's serial/Ethernet converter - equipped with one or two serial ports - makes it simple to integrate practically all serial terminal devices in existing Ethernet structures. The user is able to configure function parameters via a web console, serial console, Telnet console or a Windows utility, which applies to both serial ports as well as the Ethernet network.

Users are also able to implement - in other easily cable - a cascade connection comprising several serial/Ethernet converters to create an Ethernet network structure that enables uncomplicated access to components with a serial interface, for example via PCs. It is possible to use the two Ethernet ports integrated in the device as Ethernet switch ports. This design feature enables users to reduce cabling costs, simply because it is not necessary to connect each device to a separate Ethernet switch.

The relay output integrated in the converter serves as a warning function for administrators - a corresponding warning is sent to the service technician via email if there are any problems with the Ethernet connections or non-authorized changes are made to the serial signals and power connections, which makes it possible to react quickly in emergency situations. An alarm function (integrated buzzer and real-time clock) as well as an automatic restart function (integrated watchdog timer) in the event a failure occurs also guarantee reliability.