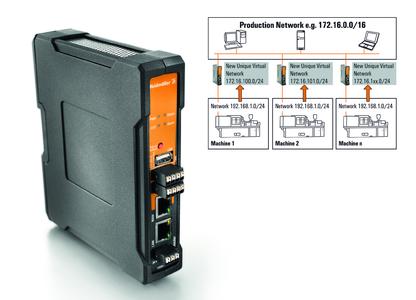 Industry-standard routers typically offer a wide range of functions. However, users generally only need a few of the available features for their particular applications. To keep the cost of integrating the IP addresses of machines into overlay networks as low as possible it is better to focus on functions that are relevant. The new firewall/NAT router IE-SR-2GT-LAN-FN from Weidmüller with two Gigabit Ethernet interfaces (10/100/1000BaseT(X)) was specifically designed for applications in which network security and Network Address Translation (NAT) are a top priority. Thanks to the integrated stateful inspection firewall with flexible two-way packet filtering (WAN/LAN inbound and outbound), the router provides reliable and secure protection for industrial IP networks.

The virtual mapping of IP addresses is easy with the firewall/NAT router and the 1:1 NAT method. In other words, standard production machines with identical IP addresses can be operated in parallel and integrated into overlay networks - without having to assign an individual IP address range for each machine.

Industrial Security Routers from Weidmüller like the IE-SR-2GT-LAN-FN help to create an optimised network infrastructure. They offer static or dynamic routing and support RIPv2/OSPF. The routers forward data traffic in a controlled manner between "switched" Ethernet networks (IP routing). They also reduce network loading by creating separate networks (broadcast limiting) and protect against unauthorised access using the firewall and masquerading functions. The firewall of the IE-SR-2GT-LAN-FN also incorporates an array of configurable filter functions and is able to recognise legitimate traffic, while reliably rejecting non-authorised attempts to access the network. The firewall/NAT router includes additional standard functions such as the prioritisation and channelling of network traffic.

Weidmüller offers additional LAN/WAN routers with built-in VPN technology. The best models for secure, worldwide remote access to machines and systems are the IE-SR-2GT-LAN with the following functions: IP routing, firewall, NAT and remote maintenance via secure VPN connections; and the IE-SR-2GT-UMTS-3G, which also has additional networking features and mobile radio-assisted data transmission.