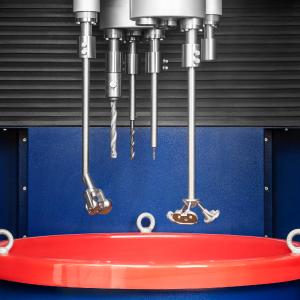 Walther Trowal developed the new drag finisher specifically for finishing high value components, which must be handled with extreme care.

Typical work piece examples from the medical engineering industry are hip and knee implants requiring a high gloss polish. In the aerospace industry turbine blades and other components must receive a first-class finish with precise edge radiusing and very smooth surfaces. Examples from the automotive industry include the vanes of turbo chargers, which must not be nicked or damaged during the finishing process.

Christoph Cruse, General Sales Manager at Walther Trowal, foresees a big demand at those customers, who produce high precision, high value components: “With our new equipment line we address precision component manufacturers, who want perfect surface finishes, and where any blemishes like scratches could require scrapping a part. We also target manufacturers demanding tolerances of just a few microns. For these work pieces the M-TMD drag finishers with their optimum flow characteristics open entirely new possibilities.“

The functional principle: A rotation within the rotation

In standard drag finishers the work pieces are mounted to rotating work stations and “dragged” through the grinding or polishing media. This movement creates a high processing intensity and produces excellent results on many parts.

The drag finisher M-TMD 4 is equipped with 4 multi spindle heads (work stations) with each head containing 3 spindles. In the M-TMD 6 up to 18 work pieces can be processed at the same time.

The independently adjustable rotational speed and rotational direction of the spindle heads and spindles creates a wide range of different movement patterns. In addition, the spindle heads can be tilted in different angles. This allows adjusting the flow characteristics to the specific shape of the various work pieces. With the PLC controller multi stage processing programs can be easily implemented.

During the finishing process the work bowl is vibrating for the optimum mixing of the grinding or polishing media. This guarantees a high degree of process consistency.

The media fines and undersize media, along with the metal fines from the work pieces, are continuously discharged from the machine; another contribution towards process stability and consistency.

The new Trowal machines can be operated in wet as well as dry processing mode. For surface grinding and smoothing, as well as for certain polishing operations, compound and water are used. In the case of targeted edge radiusing with tolerances of a few micron, for example, hard metal drill bits and milling heads, a dry process with special grinding granulate is utilized. Dry processing with organic polishing media and paste is also suitable for high gloss polishing.

Multiple finishing steps, from pre-grinding all the way to the final polishing stage, can take place in one single machine without the need to remove and remount the work pieces to the work stations: One work bowl filled with a certain finishing media can be easily and quickly removed with a pallet truck and replaced with a bowl containing another media.

The first unit of the new machine generation has been installed in the Walther Trowal test lab in Haan/Germany. It is available for processing trials with customer work pieces allowing the customers to prove their finishing process, before making an investment decision. This ensures that the customer specifications can be fully met. Once the trials have yielded a viable process, the work piece range and quantity is analyzed to determine machine type & size, media & compound type, process water treatment system and drying method.

The drag finishing technology, developed by Walther Trowal about 30 years ago, has been continuously refined and, today, is an established finishing method that is ten to twenty times more efficient than conventional mass finishing systems.

The new machines of the M-TMD series enlarge this effect by the addition of a third rotational movement of the spindles.

Since 1931 Walther Trowal develops, manufactures and markets modular and custom engineered solutions in the field of surface finishing.

Initially only making vibratory finishing equipment, over the years Trowal has continuously broadened its product range and today offers a wide portfolio of equipment and services for improving all kinds of surfaces, e.g. mass finishing, part cleaning, shot blasting and drying of a wide spectrum of parts, last but not least, the coating of mass produced small parts.