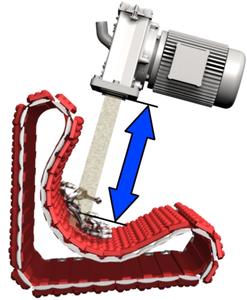 (PresseBox) ( Haan, Germany, 15-06-09 )
At the Gifa exhibition Walther Trowal displays the new continuous feed tumblast machines, which have been specially adapted for shot blasting of light metals like aluminum or magnesium. For weight reasons these 2 metals are more and more replacing steel as the material of choice for the production of a wide range of components. The soft and, therefore, gentle aluminum media has proven to be the most suitable blast media for treating components made from light metals.

The continuously increasing sales of the Walther Trowal THM shot blast systems show a clear trend toward aluminum blast media becoming more popular for blast cleaning of die-cast and forged aluminum and magnesium components. Its obvious advantage over stainless steel media is the drastic reduction of the overall operating costs due to the wear rate of the blast turbines in particular and the machine in general trending to nearly zero.

Of course, because of the lower mass of aluminum media, the turbines must throw a much larger media quantity to achieve the same processing results. For this reason, Walther Trowal re-engineered the THM troughed belt shot blast machines to ensure that they can easily cope with the higher media quantities. A highlight of the new THM shot blast machine range is the innovative electric media dosing system, which will be presented to the public at Gifa. These machines were specially adapted for gentle blast cleaning of aluminum and magnesium. But of course, they also produce excellent results on steel, zinc and brass components.

The THM continuous troughed belt machines can handle large quantities of bulk produced small parts as well as large, delicate single work pieces with complex shapes. Because of the much simpler and gentler work piece handling they frequently replace conventional batch tumblast machines. THM continuous feed machines are especially advantageous for treating very delicate components: Contrary to batch tumblast machines, where the parts are continuously tumbling over each other with a high risk of nicking, in the Walther Trowal THM machines the work pieces are spread out throughout the length of the trough, ensuring a gentle, nick-free processing. The work pieces are not tumbling over each other but gently roll over the polyurethane coating of the transport rods. This is extremely important for highly complex thin-walled parts, which must increasingly undergo an intensive blast cleaning process. The results are perfectly cleaned parts without any nicking or other damage.

Compared to spinner hanger machines the THM continuous shot blast systems have also significant technical advantages: Because the work pieces are gently tumbling through the troughed belt, they are exposed to the blast stream from all sides and, especially, always at the same distance from the turbines, ensuring all around, even shot blasting results.

Generally the blast cleaning of die-cast or forged aluminum components, for example, steering knuckles, requires a relatively soft blast media. But there is also an increasing trend towards the use of aluminum blast media for processing magnesium components, especially in the automobile industry. Many structural automotive components, for example, dashboard mountings, are made from magnesium. This material has not only a low weight, but at the same time, is also very tough.

Due to the fact that in the Walther Trowal THM shot blast systems the distance between the work pieces and the turbines is very short, the aluminum blast media - despite its low density -- has still a very high kinetic energy when hitting the work pieces. This is ideal for processing components made from aluminum and magnesium. The THM continuous shot blast machines can be equipped with a different number of turbines. For example, for forged aluminum components the THM 700/4/E with four (4) turbines with 15 kW each offers an optimum performance.

A design that is totally adapted to aluminum

To ensure the proper handling of the aluminum shot blasting media, the Walther Trowal engineering team has completely redesigned many key equipment components like the media dosing system and the blast turbines. Just one of the many details: Since a rough surface on the throwing blades would quickly wear down the aluminum blast media, the surface of the blades is smoothed in a vibratory finishing machine before they are installed in the turbine. The result is drastically reduced media consumption, lower dust emissions and a significantly higher uptime of the turbines.

For integrating the THM systems into automated manufacturing systems Walther Trowal offers a range of part feeding and handling systems like, for example, vibratory conveyors or angled belt conveyors. Many customers link the Walther Trowal blast cleaning systems directly with their forging line or die-casting machines.

But the THM systems can also be operated in batch mode. In such cases the work pieces arrive at the blast machine in special part bins and are transferred into the machine with lift & tip loaders.

Since aluminum and magnesium dust is flammable and can be highly explosive, it is of utmost importance that the dust concentrations generated by shot blasting of light metal components with aluminum remain low.

In numerous design details the Walther Trowal engineers made sure that only small dust quantities are produced during the shot blast operation and dust deposits in the machine are prevented. One example are vibratory conveyors for transporting the blast media, which totally preclude the formation of dust pockets. In addition, the dust-loaded air is cleaned in special explosion protected dust collectors, and the air speed in the machine and the ductwork is constantly monitored.

For more than 80 years Walther Trowal has been a pioneer and market leader in various surface treatment technologies. The company offers modular and custom engineered solutions for a wide range of surface treatment problems.