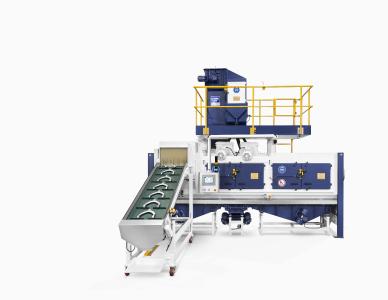 Walther Trowal has recently commissioned a THM troughed belt continuous shot blast machine for a customer in Mexico that is equipped with a brand new generation of blast turbines. These turbines were specifically designed for shot blasting of aluminum components. With a considerably higher blast media throwing speed the new turbines produce significantly shorter cycle times than the predecessor models.

The Mexican customer already operates very successfully four continuous Trowal shot blast machines. Because of their excellent performance he chose to purchase another THM machine, when he had to expand his production capacity.

The increasing sales trend at Walther Trowal indicates that ever more customers are switching to aluminum media when shot blasting aluminum components. Because of its lower bulk density aluminum media is a lot gentler than, for example, stainless steel shot. Typical automotive forgings made from aluminum are, for example, steering knuckles or swivel bearings. Aluminum die-castings processed in THM shot blast machines can be all kinds of housings, covers or levers.

Because of its lower density the impact energy of aluminum media on the work pieces is considerably lower compared to other blast media. To offset this limitation Walther Trowal developed turbines with curved throwing blades, which generate a significantly higher blast media throwing speed than straight blades. This, combined with the fact that in THM machines the turbines are located very close to the work pieces, and the media throughput is considerably higher, results in optimized energy utilization and surprisingly short cycle times. However, the shot blast treatment remains very gentle. In short, despite the relatively low density of aluminum blast media, the shot blast process is highly effective and at the same time surprisingly gentle preventing any warping or distortions of delicate work pieces.

Another benefit of aluminum blast media is that it reduces the wear rate in the turbines and the machine to a fraction of the wear caused by steel shot, resulting in higher uptimes and lower operating costs.

Walther Trowal offers a range of different machine sizes equipped with up to four turbines. For example, for forged aluminum components the new THM 700/4/E with 4 turbines and a power of 15 kW for each turbine, produces an exceptionally high degree of productivity.

To meet all the challenges posed by aluminum shot the Trowal engineers redesigned many machine assemblies, among them the media dosing system and the turbines. One detail of many: A rough surface of the throwing blades would quickly destroy the aluminum particles. Therefore, Walther Trowal is smoothing the blade surface with in-house vibratory finishing equipment. The result: A greatly reduced blast media consumption, lower dust emissions and significantly improved turbine uptimes.

THM troughed belt continuous shot blast machines are equally well suited for treating mass-produced bulk parts or large, delicate components. Especially with delicate, somewhat fragile work pieces the THM concept offers significant advantages: In these systems the work pieces are evenly distributed through the entire machine length. This results in a very gentle transport and prevents intensive part-on-part collisions. And the fact that the transport rods are covered with a relatively soft PU further cushions the already gentle tumbling action. This is particularly important for fragile components with thin walls, allowing them to be discharged from the machine without any nicking or other damage.

No problem with older THM systems!

When developing the new turbines Walther Trowal also took into consideration the many older machines still in operation: Any THM customer who wants to take advantage of the new turbines can easily install them in his existing machine(s). This allows the customers to increase the efficiency of their shot blast operation with minimal costs.

For 85 years Walther Trowal has been a pioneer and market leader in various surface treatment technologies. The company offers modular and custom engineered solutions for a wide range of surface treatment problems.