The grid behaviour of the 2.5 MW-turbine W100 was successful tested. This wind turbine was developed by W2E Wind to Energy GmbH and offered as licence product. 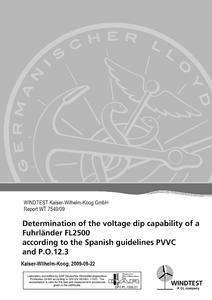 Spremberg
The grid behaviour of the 2.5 MW-turbine W100 was successful tested. This wind turbine was developed by W2E Wind to Energy GmbH (hereinafter referred to as “W2E”) and of-fered as licence product.

The complex measurement campaign is carried out by the WINDTEST Kaiser-Wilhelm-Koog GmbH (hereinafter referred to as “WINDTEST”), an accredited and well-known testing insti-tute. The W100 was manufactured by the Fuhrländer AG (hereinafter referred to as “Fuhr-länder”) and erected in Spremberg at a lattice tower with 141 m hub height. Fuhrländer AG distributes this turbine worldwide under the brand name “FL2500”.

The company eviag AG produces as licensee of the Fuhrländer AG the same kind of turbine type for the French and Polish market - projects as well as for projects in North-Africa. This technology is also licensed from the Chinese company A-POWER Energy Generation Systems Ltd.

Regarding to the fact the concentration of wind parks (with a lot of wind turbines) increased rapidly the electrical behaviour of the grid came more and more in focus of interest. In case of two-phase and tree-phase short circuits and voltage dips wind turbines have remain in operation and have to deliver reactive power. W2E and Fuhrländer have operated together to solve the multilateral topics in this area.

Fuhrländer has authorised the German Lloyd AG to provide a test plan, which covers the requirements of several national and international gridcodes.

WINDTEST tested the W100 with different grid errors, which are emulated by a complex test equipment at the medium voltage side. More than 200 dip-tests were carried out with the anticipated success.

The first final report was given now by WINDTEST. This report issued a certificate the W100 is able to react to voltage dips according to the requirements of the Spanish guidelines PVVC and P.O.12.3.

In parallel W2E’s work is concentrate on models, which are needed for the simulation of the grid behaviour in case of different grid errors. For projects in the German market these models must be validated and certificated until mid of 2010. Otherwise the permission of a grid connection will not be given. The validation is as well a condition for the bonus payment according to the German System-Service-Act, so called “Systemdienstleistungsverordnung (SDLWindV) “.

According to the concern policy W2E is always in cooperation with in the market well-accepted suppliers. DIgSILENT GmbH has supplied the software tool ‘PowerFactory’ and supported W2E in many ways. The worldwide leading manufacture of wind turbine converters, CONVERTEAM GmbH, has designed the control algorithm for the power electronics, which is able to run under the software tool ‘PowerFactory’. W2E has integrated henceforth the turbine controller, wind model, blade model, and models of the drive train, generator, transformer and the wind park equipment.

In the next year the results of the measurements and of the corresponding simulations, which are carried out by W2E, will be evaluated by the German Lloyd. The successful validation is an essential condition to obtain the unit certificate under the Renewable Energy Law in Germany (“Einheiten-Zertifikat”).

The result of the highly specialized design is offered to international customers as licenses. W2E deliver this product as a comprehensive set of documents which enable the licencee to manufacture, install, commission and maintain the wind power plant. Documentation comprises all calculations, proofs, certificates, part lists, specifications, descriptions and drawings, including training documents. All of our documentation complies with an established quality-assurance system.

W2E Wind to Energy GmbH was founded in May in 2003. The number of employees increased from 7 to 20. A subsidiary was established in canada. W2E has customer relationsships to german, chinese, indian, korean and american companies. The product portfolio offers turbine plattforms for 1.3 MW, 2.0 MW and 2.5 MW.