Saxophone, food and drink against a 22 MW turbine backdrop 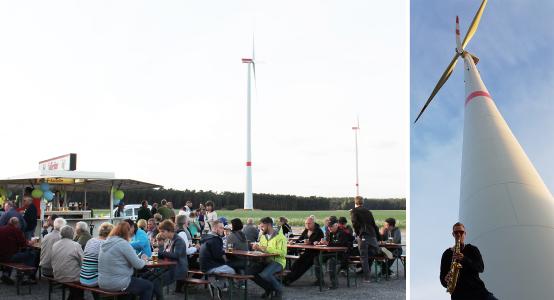 (PresseBox) ( Zahna-Elster, 16-09-28 )
Under clear skies, mayor Peter Müller and the vortex energy group's wind team met with all the companies involved in the construction to celebrate successful commissioning together with over 200 guests. Among them were property owners, who have been supporting the project now for almost four years, as well as interested residents from the surrounding communities of Gadegast, Zallmsdorf, Naundorf, Mellnitz, Leetza, Külso and Dietrichsdorf.

Construction of the Gadegast wind farm began at the end of March this year and was successfully completed in September. "I would like to thank system manufacturer GE, our site manager Dirk Kleemann from Zetcon, the Max Bögl construction company, the power grid company Mitnetz and the company Global Energy from Stettin as well as the investment team from Prime Capital. The teamwork on this project was exemplary and allowed vortex energy's team to quickly implement the Gadegast wind farm in just seven months. Everyone involved deserves a pat on the back", says Dr. Florian Leuthold, Board Member and Managing Director of vortex energy Deutschland GmbH, in his welcoming speech. Christian Banzer then opened the buffet. As the Managing Director of Prime Capital, he represented the wind farm investor, a German insurance company, in all the phases of project acquisition.

GE 2.75 MW wind energy systems with a total height of 199 meters were constructed. Each of the systems has an electrical output of 2.75 MW. The hub height is 139 meters, and the rotor diameter is 120 meters. Five of eight systems are already feeding power into the regional grid. The rest of them will be started by the end of the month, thus providing a total of 16,000 households with green energy.

This project placed special emphasis on communication and transparency in order to promote acceptance among the local population. From the outset, citizens were involved in the project via personal talks and regular project newsletters. At the opening ceremony, project brochures also provided an overview of the project – from acquiring all environmental certifications and approval according to the Federal Immission Control Act (BImSchG) to the first steps of laying the foundation.

Starting at the end of 2012, vortex energy Deutschland GmbH developed, planned and implemented Gadegast wind farm. Following commissioning, it remains closely tied to the Zahna-Elster district. Vortex energy will be responsible for technical management of the wind energy systems as well as carrying out numerous environmental compensation measures to maintain the natural environment. The vortex energy group has implemented 18 wind farms with a total capacity of 366 MW in Germany and Poland. The next wind project "Felsberg" is already in the starting blocks in the home region of Northern Hesse. Construction starts in October 2016. A total of six Nordex N-131/3000 systems with an installed capacity of 3 MW each and total output of 18 MW will be commissioned in 2017. Special features of this project include its forest location and implementation of a communal wind energy system.