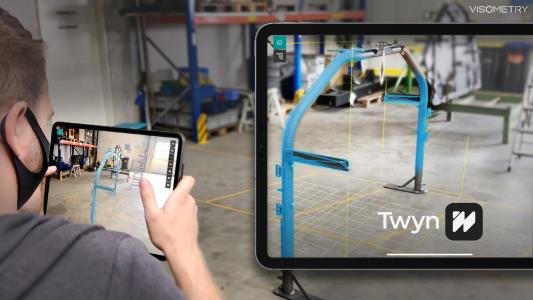 (PresseBox) ( Darmstadt, 21-04-13 )
Before components from suppliers get into production, incoming goods control must check and ensure the components’ quality. With Twyn, the German deep tech start-up Visometry introduces a novel augmented reality based mobile inspection system to check components in real time. Twyn’s first version is now being published, in time with Hanover Messe.

These benefits prove themselves valuable particularly at the beginning of the production process, because downtimes can be avoided by finding errors at an early stage. Using Twyn, all parts, not just samples, can be backed up to reduce scrap, rework and costly recalls.

With its innovative visualization tools and precise auto-alignment of superimposed digital twin and physical object, Twyn finds deviations faster than ever before and allows to check more parts in shorter time. “This reduces the high risk for consecutive errors and follow-up costs in production or for repair tasks in the field”, says Visometry co-founder and COO Dr. Harald Wuest. With an integrated reporting process, defects are captured and tracked digitally from the beginning. The digital by design workflow enables a faster interaction of different business units to quickly identify sources of errors and supports them to consider improvements sooner in the product development cycle.

Since almost a year now, Twyn is already in regular use by pilot customers. One of them is agricultural machinery manufacturer Krone. With highly complex products and numerous configuration variants, Krone uses Twyn to improve quality inspection and to reduce complexities of the inspection process. Being able to find errors more quickly while increasing the inspection frequency, Krone avoids down times more often and speeds up iteration cycles between assembly and construction. “But what really impressed us was that Twyn enables us to perform checks unrealizable so far:  Because Twyn is all mobile running on a tablet, our engineers can now bring the inspection to (even very big) assemblies, not the other way around.” says Andreas Audick, quality engineer at Krone. Parts do not have to be transported, they can be inspected right on site at, practically speaking, any time in the production cycle: incoming goods reception, end of line, or for quality documentation before the shipment.

For Visometry it was just an obvious next step to go deeper into the direction of quality assurance. Its core augmented reality tracking SDK VisionLib allows to align CAD to captured counterparts fast and accurately, which makes the enterprise-grade object tracking a cornerstone for industry 4.0 and digital twin technologies. According to Wuest, many companies still struggle putting AR to regular use, especially because of the laborious preparation effort of AR systems. “With Twyn we have simplified and eased the process to a minimum of data preparation, so users can focus on the inspection and engineering tasks itself, without becoming at first an IT or AR professional”, explains Wuest further.

At Visometry, however, this is just the next step towards Industry 4.0. With its background of more than 10 years in Computer Vision and mobile computing, Visometry is currently stretching the limits of its augmented reality tracking. The aim is to completely automate the inspection process so that Twyn checks for the existence of parts, whether the right parts are assembled, or whether position and orientation are accurate. “We have first pilots of this automated inspection running with promising feedback from pilot users.” says Wuest. While such technology brings a novelty in regards to comparable mobile inspection systems, a trial version of Twyn’s first release is now publicly available. Interested customers can now contact the company’s sales team to test Twyn for their use cases at visionlib.com/twyn.

Visometry digitizes quality assurance in industrial manufacturing processes through augmented reality object recognition and tracking. As a young startup and Fraunhofer spin-off, the team combines an innovative spirit with many years of R&D experience and deep know-how for augmented reality, computer vision technologies and their application in industry. The VisionLib Engine offers Augmented Reality tracking on an industrial scale: it enables precise 'multi-object tracking' in an automated workflow from CAD to AR. Visometry's products are used from automotive to engineering for AR apps & XR services as well as for production & quality assurance to increase productivity and ensure high quality at low inspection costs. Visometry is backed by investors High-Tech Gründerfonds (HTGF) and Fraunhofer Venture.

Observability ist ein ganzheitlicher Ansatz zur besseren Beobachtbarkeit von IT-Anwendungen, der über klassisches Monitoring hinausgeht. Die Systeme und Anwendungen werden umfassend beobachtet und überwacht, um mögliches Fehlverhalten und die Gründe dafür direkt zu erkennen. read more
The publisher indicated in each case is solely responsible for the press releases above, the event or job offer displayed, and the image and sound material used (see company info when clicking on image/message title or company info right column). As a rule, the publisher is also the author of the press releases and the attached image, sound and information material.
The use of information published here for personal information and editorial processing is generally free of charge. Please clarify any copyright issues with the stated publisher before further use. In the event of publication, please send a specimen copy to service@pressebox.de.