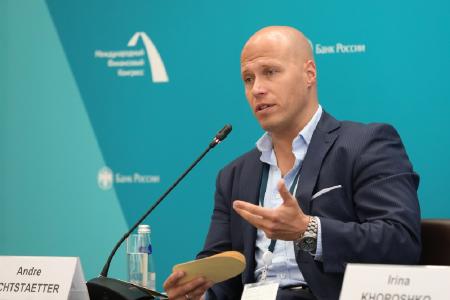 (PresseBox) ( St. Petersburg, 19-07-12 )
Andre Achtstaetter acted as moderator of the session “Online Services in the Microfinance Market: Challenges and Growth Prospects” and speaker of the session “Partnership between Credit and Microfinance Organisations: Benefits and Threats to Business and Consumers”.

The largest Russian professional finance event was held on July 3-5 – the XXVIII International Financial Congress under the aegis of the Bank of Russia and the Roscongress Foundation, which gathered together more than 1,200 representatives of legislative and executive authorities, foreign regulators and international organizations, largest banks and financial companies, professional associations of financial market participants, as well as recognized international and Russian experts from 41 countries. The special guest of the Congress was Muhammad Yunus, the winner of the Nobel Peace Prize.

The organizers designated the main topic of the congress as “Financial markets: increasing complexity, maintaining sustainability”. Several thematic areas were highlighted in the program of the event: monetary policy and macroeconomics, banks, insurance, collective investments, professional participants of the financial market and microfinance.

At the congress opening speech the Governor of the Bank of Russia Elvira Nabiullina said, that “there are two major issues that we cannot gloss over if we are to ensure sustainable economic growth. First. We need to create incentives for entrepreneurs. It is the business community that fosters economic growth, not the state. Public investment cannot replace private capital.”

“Second. Structural changes take time. Initially lulled by soaring oil prices, then faced with the need to focus on strengthening macroeconomic stability, we delayed many structural reforms that were long overdue, and now we want fast deliverables. It is a deja vu when we start searching for simple solutions, like searching for a lost item not where we lost it but where there is light.”

The event was held in the format of a round table offering a transparent dialogue, where speakers discussed with other participants the most important issues of the functioning of different financial market segments.

The further development of the online segment of the microfinance sector was one of the key topics and 6 sessions, distributed throughout the congress program, were devoted to this problem.

Speaking as a moderator of the session “Online Services in the Microfinance Market: Challenges and Growth Prospects” and discussing with speakers the introduction of the latest technologies in microfinance insitutions and the role of regulating the sector Andre Achtstaetter noted the following:

„The regulator can be a strong wave that either is against you if you don`t know how to get the wave or you know how to stand up and the energy of regulator makes you fast going through to the sands. So, this is basically how you can use the regulator to either accelerate or if you don`t listen you can be destroyed. Regarding fintech, I think it`s clear we need to have a good relationship with the regulator, we need to understand how to turn data into information. And let`s not forget about the most important thing – it`s the customer we serve. The customer should be put at the center.“

According to the Deputy Governor of the Bank of Russia Vladimir Chistyukhin, who presented his vision on the sidelines of the financial congress, a significant part of Russian microfinance institutions  will be transferred to the digital space in the medium term, in about 5 years.

“Online is a very important topic, I guess that since microfinance institutions are much smaller than banks, they have much less staff, they are much more, let’s say, flexible in terms of decision making and implementation. I think that a significant part of the microfinance market will be transferred to the digital space”, he said, answering the question about the prospects for the development of the  segment in Russia in the next 5 years.