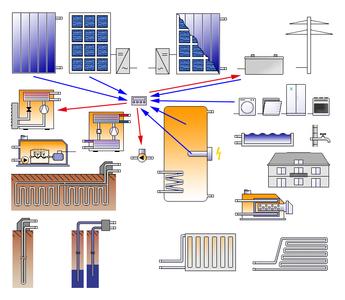 (PresseBox) ( Winterthur, 14-05-27 )
The following features were added to Polysun or extensively enhanced: Component catalogue and template database updates give designers a useful helping hand
While it may not sound spectacular, the most significant improvement included in the new Polysun 7.0 update is by no means less important and useful to designers: software provider Vela Solaris has, in fact, extensively overhauled component catalogues, template databases and standard templates of its innovative simulation software, laying the foundations for a more efficient design of solar and geothermal systems.

The current trend of combining PV and heat pumps systems is posing new challenges to system designers; for this reason, starting from version 7.0, the software was extended with additional ready-made templates, including, in particular, new templates from solar inverter producer SMA (www.sma.de) and from young ETH spin-off company Eturnity (www.eturnity.ch).

In light of the enthusiastic reception it received from users, the programmable controller, introduced in a previous version of Polysun, was enhanced with a number of new templates and new features such as the heating curve for space heating.

The software was enhanced with the following new features
Widely used globally, power-controlled heat pumps (inverter technology) can now be displayed through stepless modulating air-water heat pumps in the new 7.0 version of Polysun. This makes it possible to adjust heat generation to the power made available through the PV field. As a result, the heat pump can be operated with a higher percentage of solar power while optimising PV self-consumption.

→ Micro-inverters: Now, the Polysun design wizard specifically allows systems to be designed with micro-inverters based on the simple «Plug & Play» principle, as offered by micro-inverter manufacturers. This makes inverter dimensioning considerably simpler whilst increasing planning security.

→ Simulation of cogenerators and combined heat and power (CHP): Standard templates include both electrically-driven and heat-driven systems. Now, component catalogues have been extensively expanded. This, together with the programmable controller, allows the detailed simulation of smart-grid solutions with decentralized power generation both through PV and combined heat and power (CHP).

→ Generator for off-grid PV systems: Starting from version 7.0, Polysun provides the user with a generator for purely electric and combined heating and power systems (see figure 1), allowing an accurate, true-to-life simulation of off-grid systems. In addition, temporary independence from the grid, as happens in shaky distribution networks, can also be simulated.

Polysun in use worldwide
As a latest innovation, Polysun is now also available in Arabic. This involved translating the whole user interface into this language, a task that, since Arabic is written from right to left, took some extra time and work.

Vela Solaris AG develops and markets worldwide its Polysun design software, an innovative tool used by engineers and installers alike to design and optimize decentralised energy systems including solar thermal, photovoltaic, heat pump and geothermal systems. The product range is rounded off by software versions tailor-made to suit the needs of large customers as well as by an online solution.