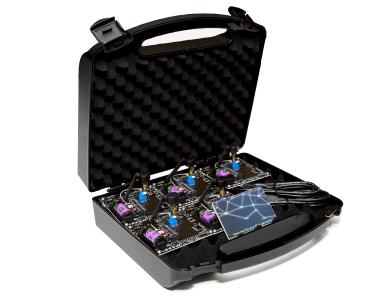 (PresseBox) ( Düsseldorf, 16-09-27 )
The patented, self-managing ad-hoc wireless mesh-network protocol from the Danish producer NeoCortec guarantees a safe and reliable operation of sensor networks and will be presented by Unitronic Electronics on the occasion of the electronica fair 2016 in hall A4, booth 373 in Munich.

Apart from the net administration the routing process occurs entirely automatic.The patented NeoCortec Speed Routing Protocol is designed for coping with complex problems in a dynamic and huge network entirely on its own. In contrast to other present-day routing protocols, the NeoCortec Speed Routing Protocol doesn`t determine the detailed way from A to B in advance. Instead the protocol detects which of the surrounding nodes is best suited for reaching the next jump target and finally the end node by accessing the “brain” of each single node. While the information is flowing through the network, the analysis of the neighboring node is used to determine the optimum route through the network. As the “brain” of the single nodes is constantly updated in real time, the way keeps on changing depending on current topology and link quality.

Especially in cases where no permanent data exchange is required – i.e. if measuring values are updated in minute or hourly intervals only – extremely long-living battery-driven IoT sensor applications can be realized with this technology. As with the help of this unique protocol the entire network can be put into sleep mode at synchronic times, battery lives of several years can be realized with an average power consumption of  <20 uA.

As for the administration of the up to 64000 end nodes no central network node is needed as usually is the case for technologies used so far, the network can be modified resp. enlarged trouble-free and without any great technical effort. Thus applications in the sectors interface smart meters, decentral energy production, intelligent home networking, industry automation, logistics, agriculture, smart cities and so on, can be realized ready for the market within shortest times.

Unitronic GmbH, founded in 1969, is a member since 2002 of the Swedish holding Lagercrantz Group AB. The company has set itself a goal to support customers in German speaking regions with competent design-in and after sales support and actively help customers in the selection and implementation of the latest technologies available. Unitronic has franchise agreements with more than 30 leading manufacturers in the sectors of semiconductors, sensors, displays and modules for telematics, telemetry, navigation and connectivity. This broad range of products guarantees the best selection of suitable products for the respective customer's application. 23 employees in four sales offices throughout Germany provide customer proximity. Additional information can be found at: www.unitronic.de