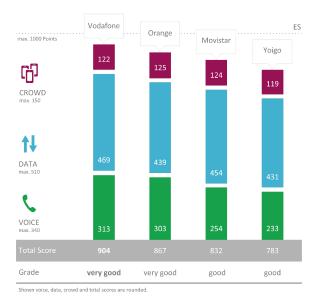 (PresseBox) ( Aachen, 18-11-13 )
Today, P3, the international consulting, engineering and testing services company and connect, the international telecommunication test magazine for consumers, have named Vodafone as the “BEST IN TEST” operator in Spain. Following a series of tests measuring the quality of network performance, Vodafone takes the lead in the P3 connect Mobile Benchmark in Spain 2018 – the fourth time in a row.

The report surveyed four networks – Movistar, Orange, Vodafone and Yoigo – using a highly sophisticated range of measurements in 19 Spanish cities, as well as 29 towns and along 8,400 kilometres of connecting roads. P3’s holistic approach to network benchmarking includes drivetests and walktests, for executing detailed voice and data measurements under controlled circumstances, as well as a sophisticated crowdsourcing approach.

In the crowdsourced assessment designed to augment and verify the drivetest and walktest results looks at User Download Speed and Data Service Availability. Here, Orange takes the overall lead, scoring slightly ahead of Movistar and Vodafone. Vodafone achieves the best score for User Download Speed, Orange and Movistar are on par in this category. Yoigo’s improvements are also reflected in a decent crowd score. All for Spanish networks show excellent Data Service Availability.

Hakan Ekmen, CEO P3, explains: “Our holistic approach clearly confirms, that the Spanish operators have worked hard to improve their network performance and user experience. We are happy to see some considerable enhancements compared to the results of previous years and are quite sure that our demanding benchmarks have played a role in the serious efforts taken by the Spanish operators recently.”

Following the 2018 publication in Spain, further P3 connect Mobile Benchmarks will be published in Germany, Austria, Australia, UK, Switzerland, The Netherlands and Sweden within the coming months.

About the P3 connect Mobile Benchmark

The P3 connect Mobile Benchmark is totally independent combining the expertise of P3, the industry’s advocate and global authority regarding measuring network performance, with 25 years of editorial experience and testing knowledge of connect, that is regarded as a leading consumer authority in Europe. The independent benchmark methodology of P3 assures a fair, transparent and neutral evaluation of the networks under test. The benchmark is positioned to be a unique measure for management and supervisory boards to compare their networks with others, and for customers to make better decisions for their subscriptions.

The 2018 P3 connect Mobile Benchmark Spain consists of drivetests and walktests conducted throughout September 2018. Four drive test cars together covered about 12,400 kilometres. The test areas account for more than 12 million people, or roughly 25.8 per cent of the total population of Spain. In addition, the results of extensive crowdsourcing analyses considering July, August and September (Data Service Availability: May to September) in 2018 are included in the score.

Die Anforderungen an Telekommunikationsnetze steigen kontinuierlich. Immer größere Datenmengen erfordern immer mehr Bandbreite. Gleichzeitig sind hohe Skalierbarkeit und ein nachhaltiges Ressourcen-Management gefragt. Wie lässt sich die Internetarchitektur der Zukunft gestalten? read more
The publisher indicated in each case is solely responsible for the press releases above, the event or job offer displayed, and the image and sound material used (see company info when clicking on image/message title or company info right column). As a rule, the publisher is also the author of the press releases and the attached image, sound and information material.
The use of information published here for personal information and editorial processing is generally free of charge. Please clarify any copyright issues with the stated publisher before further use. In the event of publication, please send a specimen copy to service@pressebox.de.