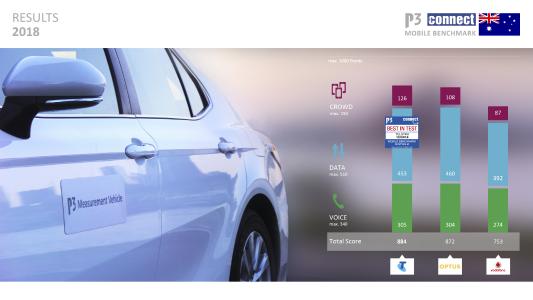 (PresseBox) ( Aachen/Haar/Sydney, 18-12-13 )
P3, the international leader in benchmarking mobile networks in co-operation with connect, an international telecommunication test magazine for consumers, have named Telstra as the “best in test” operator in the latest
P3 connect Mobile Benchmark in Australia 2018. As in the previous year, it was a close race between the two largest Australian operators. This year, Telstra is the overall winner with Optus a close second. Both operators improve performance compared to the previous year with a “very good” while Vodafone confirms its position with overall “good” results. All three Australian operators have once again shown that they put a strong focus on customer experience.

It is the fifth benchmark P3 has conducted in Australia and for the second time in co-operation with connect. Together, the partners frequently test the mobile networks in Germany, Austria, Switzerland, the United Kingdom, Spain, the Netherlands and Sweden. Their benchmarks are regarded as the de-facto industry standard. In Australia, the P3 connect Mobile Benchmark tested the three networks of Optus, Telstra and Vodafone. The results are based on extensive voice and data drivetests and walktests as well as on a sophisticated crowdsourcing approach.

Telstra is the overall winner with strong crowdsource and voice experience, while Optus provides the best data experience.

With a grade of “very good” and a score of 884, Telstra did best overall, leading in the voice and the crowdsourcing category. Last year’s winner Optus ranks second with a score of 872 points, leading in the traditional drive- and walktest category and ends up with a “very good”. In the city drivetests, Vodafone shows a very good performance close to the other two contenders and can pride itself to have had no service degradations in the period from July 2017 until October 2018, but falls behind in other categories. The operator ranks third with a score of 753 points and a “good” grade.

The comparison of Australia’s cities – Adelaide, Brisbane, Canberra, Melbourne, Perth and Sydney – reveals different local champions as well as varying distances between the three contenders. In Adelaide, all three networks are almost equally strong. In Brisbane, Telstra remains strong with Vodafone seizing second position. In Canberra and Melbourne, Optus takes a narrow lead ahead of Telstra, which mostly derives from strong data results. In Perth, Telstra is again the market leader with Optus and Vodafone almost on a par. In Sydney, Telstra takes the lead, which results in basically the same ranking as in the nationwide tests.

Hakan Ekmen, CEO P3 communications, explains: “In large-scale countries such as Australia, user experience is of especially high importance as the focus must be less on covering extensive areas, but more on actually reaching the users. Therefore, our unique crowdsourcing methodology is a crucial factor in the results. Our holistic approach clearly confirms that the Australian operators have worked hard to further improve their networks’ performance and availability.”

Following the 2018 publications in the Netherlands, Spain, Germany, Austria and now Australia, the P3 connect Mobile Benchmark will be published in the UK within this month, Switzerland, the Netherlands and Sweden will follow in early 2019.

About the P3 connect Mobile Benchmark

The P3 connect Mobile Benchmark is totally independent combining the expertise of P3, the industry’s advocate and global authority regarding measuring network performance, with more than 25 years of editorial experience and testing knowledge of connect, that is regarded as a leading consumer authority in Europe. The independent benchmark methodology of P3 assures a fair, transparent and neutral evaluation of the networks under test. The benchmark is positioned to be a unique measure for management and supervisory boards to compare their networks with others, and for customers to get a better understanding of how the different networks are performing.