Unitymedia and Net Cologne are clear leaders, followed by Telekom, Vodafone and Telefonica 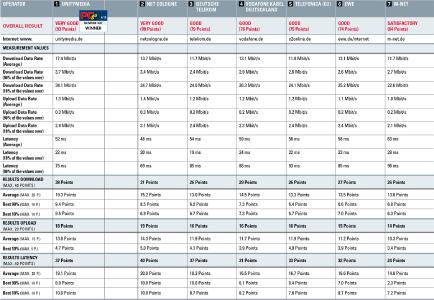 (PresseBox) ( Aachen/München, 18-02-28 )
Which Internet service provider delivers the fastest downloads, the speediest uploads and the shortest packet transit times to its customers across Germany? In the first comprehensive crowdsourced study of customer experience on German fixed line networks Unitymedia and Net Cologne emerged as the clear leaders. The study is released today by P3, the global leader in network benchmarking, and the German magazines PCgo and PC Magazin.

“We wanted to test data speeds and latencies actually experienced by fixed line customers,“ said Hakan Ekmen, CEO P3 communications. “That’s why we used crowdsourcing. It facilitates a wide gathering of individual performance and quality parameters both spatially and temporally. The underlying, real user transactions make it possible to examine the data technologies in use. Data that has been collected via domestic WiFi networks allow us to evaluate fixed line operators – covering thousands of households.”

Over three months – November 2017 through January 2018 – P3 used its on-device testing methodology to perform measurements that paint an accurate picture of the actual fixed line data speeds and latency German broadband operators actually provide to their customers. The test spanned more than 150,000 fixed network connections all over Germany, more than 5 million single measurements of the available data speeds and almost 30 million latency measurements (the transit times of data packages from the networks to the users).

From this perspective, Unitymedia leads in delivering the highest average data speeds and Net Cologne, offers the shortest latency rates of all the Internet providers tested. Telekom, Vodafone and Telefonica performed well, although operator performances differ significantly in the various German federal states. You can download the full study here.

P3 has integrated measurement functions in several popular smartphone apps, that work in the background to collect currently available data rate, packet transit times and data performance. In order to assign these measurements to operators, the IP address of the transfer is used. Millions of data points were communicated anonymously during the day to P3‘s servers and then analysed with sophisticated methods by P3’s data artists.

Hakan Ekmen said P3 plans to further refine the insights obtained by crowdsourcing: “In the fixed-line networks we currently measure uplink and downlink speeds as well as latency, but we want to expand on these metrics to include criteria like network stability and service quality. We place the same high demands on the reliability of our crowdsourcing results as we do on all the other elements of our network testing. This applies not least to the statistical relevance.”