Vodafone comes second, followed by Three in third position and O2 in fourth 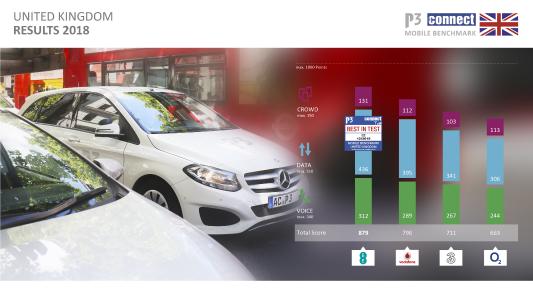 (PresseBox) ( Aachen/Haar/London, 18-12-20 )
P3, the international leader in benchmarking mobile networks in co-operation with connect, an international telecommunication test magazine for consumers, have named EE as the leading mobile provider in the fifth of its annual tests measuring the quality of network performance in the UK.

The P3 connect tests are recognised as the most trusted benchmark among UK operators, providing insights into voice, data, 4G services and real-world user-download speeds. This year’s tests included a unique, crowdsourced assessment of service availability and the first set of tests on trains.

Hakan Ekmen, CEO P3 communications, said: “The UK’s networks improved overall on last year. We adapt our testing methodology every year to keep close to technological advances as well as to the actual experience of end-users. This year, we have added the railway measurements into our scope for the P3 connect Mobile Benchmark in the UK and derived some interesting conclusions. For next year, we expect the first developments in 5G to come.”

EE leads in all tested disciplines including the now extended crowd score and also leads the field in most of the single categories of the assessment. EE’s strong voice results are based on its use of the modern EVS codec. Vodafone achieves an overall good second rank. This operator scores particularly strong in the big cities and on the connecting roads. In the data walktests in big cities, Vodafone is on a par with EE. In the crowd analysis, Vodafone achieves an overall good result, scoring one point behind O2. The smallest UK operator ranks third overall, but scores best in the data drivetests in smaller towns. Like all UK operators, Three increases its performance on the roads. Also, it shows a good Data Service Availability with just one hour of degradation in the observation period. The third largest operator in the UK all in all scores the same performance as last year – which due to our increasing requirements leads to a net loss in points. However, in the extended crowd score, O2 ranks second. Like Three, O2 offers good voice results particularly in smaller towns. As its competitors, O2 also improved on the roads.

For the first time in the UK, this year’s P3 connect Mobile Benchmark also comprises walktests conducted while travelling on British trains. Here, the results are overall weak. Even EE as the strongest candidate only achieves 48 per cent of the possible points in this discipline. Vodafone follows with a meagre 29, Three at 27 and O2 at 24 per cent. The main problem is the very limited call success ratios. The newly added railway measurements reveal big challenges for all operators.

The overall winner in London is EE (repeating last year’s result) with results that were in some cases better than its national scores. Vodafone achieves a strong second position in the capital, while in contrast to the national rankings, O2 is in third place, narrowly ahead of Three in the fourth spot.

The tests were conducted between 8am and 10pm from October 30 to December 3, 2018. Four cars were employed, and teams on foot used battery-powered backpacks equipped with arrays of Samsung Galaxy S8 smartphones for simultaneous measurement of voice and data.

Besides the UK benchmark, P3 connect Mobile Benchmarks are published in Australia, Spain, Germany, Austria, Switzerland, Sweden and the Netherlands.

About the P3 connect Mobile Benchmark
The P3 connect Mobile Benchmark is totally independent combining the expertise of P3, the industry’s advocate and global authority regarding measuring network performance, with more than 25 years of editorial experience and testing knowledge of connect, that is regarded as a leading consumer authority in Europe. The independent benchmark methodology of P3 assures a fair, transparent and neutral evaluation of the networks under test. The benchmark is positioned to be a unique measure for management and supervisory boards to compare their networks with others, and for customers to get a better understanding of how the different networks are performing.