Robust and ready to connect 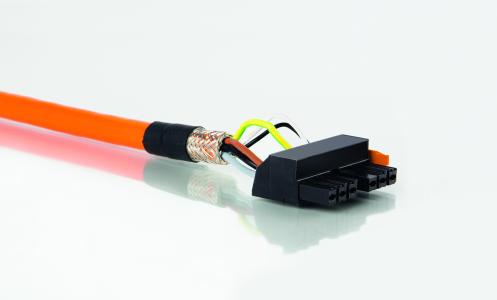 (PresseBox) ( Stuttgart, 16-09-06 )
In industry, there is a growing trend towards ready-assembled solutions that can be directly integrated into machines and systems. The Lapp Group is responding to this trend by further expanding its range of ready-assembled connection solutions. At the SPS IPC Drives trade fair from November 22 to 24, the technology leader from Stuttgart will be exhibiting new connectors for the ÖLFLEX CONNECT SERVO, a family of servo assemblies that are assembled semi-automatically in an innovative process. There are other connectors for the new generation of controllers from Siemens, as well as for Fanuc drives, with the latter being exceptionally compact and leak-proof thanks to a brand new injection moulding process. In the area of HITRONIC optical cabling systems, the range of customised ready-assembled solutions has been reorganised with a focus on industrial applications. "The demand for system solutions is increasing, which is why we are expanding our ÖLFLEX CONNECT initiative", said Georg Stawowy, Member of the Board and CTO at Lapp Holding AG. The growing range of ready-assembled cables is Lapp's response to requests from numerous engineering customers, who want to concentrate on their core competences. Lapp will also be presenting new highly dynamic drag chain cables and robust sensor/actuator cables, as well as the cable industry's first antistatic cables.

New connectors for ÖLFLEX CONNECT SERVO
ÖLFLEX CONNECT SERVO is an important pillar of Lapp Group’s strategy. In these servo assemblies, the cable and connector are connected semi-automatically, leading to advantages in quality and shielding effect. At SPS, Lapp will be adding two further versions to the range:
- On the drive side, following products complying with Siemens, SEW and Rockwell standards, there will now also be a connector for drives made by Fanuc. Technically, the Fanuc connector is a genuine innovation. It is first encapsulated and then injection moulded, using two different plastics, allowing a smaller construction and greater impermeability. In conjunction with thin cables from Lapp, the result is space-saving cables with smaller bending radii, a particularly important feature for manufacturers of compact machines. A further advantage of the connector is that the seal for the cable is integrated, which means that it cannot be lost during assembly and there are no screws in the moulded connector.
- On the controller side, Lapp is adding a connector to the range, which has been specially developed for the new booksize controller generation from Siemens. This makes Lapp the only independent manufacturer to offer a cost-efficient alternative to the Siemens connectors. And what's more, instead of having to screw the conductors in the cable, in the ÖLFLEX CONNECT SERVO they are semi-automatically crimped to the contacts in the connector, which creates a very strong connection that is gas tight and thus prevents oxidation at the contact.

Customised HITRONIC fibre optic cable assemblies
The ÖLFLEX CONNECT portfolio comprises not only copper-based conductors. At SPS, Lapp is supplementing the range with HITRONIC fibre optic cables for industrial and office use. Users can define fibre optic cable assemblies tailored to their requirements based on the comprehensive range of LAPP HITRONIC cut to length range. This way, they save themselves the splicing, connection and installation work normally associated with glass fibre connections. The assembled length can be installed on site and then plugged directly into the system and used (plug & play).

ÖLFLEX CHAIN 90 P/CP high-end industrial cable
The new ÖLFLEX CHAIN 90 P/CP is part of Lapp's extended line performance class and is aimed at users who have the highest demands for use in constantly moving drag chains. The cable with extended maintenance intervals has a highly abrasion-resistant and notch-resistant PUR outer sheath and special TPE conductor insulation that is flexible even at very low temperatures. This makes it suitable for both indoor and outdoor use - for example in industrial drives but also in wind turbines or electric vehicles, where limited space often calls for very tight bending radii. It is extremely resistant to mineral oil based lubricants, UV and weather-resistant, halogen-free and highly flame retardant. On top of all that, the ÖLFLEX CHAIN 90 P/CP is UL/cUL-certified. This means it is approved for use in North America, thanks in part to the extended operating voltage of 1,000 Volts. The cable is available in unshielded (P) or shielded (CP) versions.

UNITRONIC ROBUS S/A for sensor/actuator cabling
The new UNITRONIC ROBUS S/A sensor cable is just as resistant. The cable is designed for transmission of signals of sensors and actuators. It extends Lapp's ROBUST family, which already includes control, Ethernet and bus cables. The ROBUST cables from Lapp show their strengths in the food industry, but also in other areas where they are exposed to cleaning agents or bio-oils. The ROBUST material is highly resistant to cold and hot water, with lower water absorption than other materials. The temperature range is -50 to +90°C Celsius in a fixed installation and -40 to +90°C in mobile applications. It is particularly suitable for applications in wet areas and for outdoor applications.

Anti-static cables complying with TRBS 2153
A real treat on the Lapp stand - and an innovation in the cable industry - are anti-static cables. They provide greater safety in locations where sparks caused by static charges can lead to disasters, for example on oil drilling platforms, in refineries or when processing wood or flour. To prevent this danger, Lapp has developed a power supply cable with an anti-static sheath. These cables are already being used on oil drilling platforms belonging to Norwegian service provider Aker Solutions. The composition and production of the sheath material are both patent protected. All that can be revealed is that the sheath is made from a plastic with a special additive that increases conductivity. The Lapp Group is the first manufacturer in the world to offer this kind of anti-static cable. On request, Lapp can supply various cable types with this property.

Headquartered in Stuttgart, Germany, the Lapp Group is a leading supplier of integrated solutions and branded products in the field of cable and connection technology. The Group's portfolio includes standard and highly flexible cables, industrial connectors and screw technology, customized system solutions, automation technology and robotics solutions for the intelligent factory of the future, as well as technical accessories. The Lapp Group's core market is in the industrial machinery and plant engineering sector. Other key markets are in the food industry as well as the energy and the mobility sector.

The Lapp Group has remained in continuous family ownership since it was founded in 1959. In the 2014/15 business year, it generated consolidated revenue of 886 million euros. Lapp currently employs approximately 3,300 people across the world, has 17 production sites and over 40 sales companies. It also works in cooperation with around 100 foreign representatives.