Lapp down under: Full range of products now in Australia 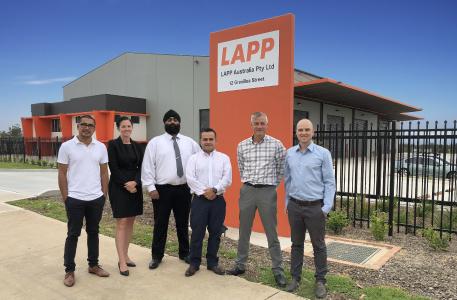 (PresseBox) ( Stuttgart, 18-02-22 )
The Lapp Group, the global market leader for integrated cable and connection products, has entered a partnership in Australia with the New Zealand company ECS. The joint venture Lapp Australia now offers the full range of Lapp products down under.

The company’s headquarters was opened on 1 February 2018 in Eastern Creek, Sydney, and boasts three quarters of an acre of floorspace. According to Terence Rayner, Managing Director of Lapp Australia, the new company will set new benchmarks for service and variety on the Australian market. Alongside a large onshore inventory of over 1,000 product series, customers also have direct access to over 40,000 standard products from the Lapp Group’s global product ranges. This is an appealing offer for the Lapp Group’s global customers who are active on the Australian market. The service and quality that they have come to expect from Lapp is now also available in Australia.

For Lapp, the Australian market is a very interesting one. According to Alexander Lapp, who is responsible for e-business and digitalisation at the company,the investments provided by the Lapp and Rayner families in Australia represent a clear vote of confidence in local industry. “Demand for industrial automation solutions is set to grow strongly in Australia. We see great opportunities here”, says Alexander Lapp, who initiated the joint venture for the Lapp Group. According to forecasts, the automation market in Australia is set to grow to over 280 billion euros by 2024[1]. “Thanks to the long and successful relationship we have enjoyed with the Rayner family, we can now serve customers in Australia together”, emphasises Alexander Lapp.

ECS is a leading provider of electronic and automation products in New Zealand. Two generations of the Rayner family are currently active in the company, which was founded in 1983. ECS began by designing and manufacturing automated machinery for a variety of sectors, including production systems for the dairy and construction industries. The company’s need for top-quality cables and products led it to Lapp, from whom it has purchased items for its own production ever since. ECS has represented Lapp and sold Lapp products in New Zealand for over 30 years.

Headquartered in Stuttgart, Germany, the Lapp Group is a leading supplier of integrated solutions and branded products in the field of cable and connection technology. The Group's portfolio includes standard and highly flexible cables, industrial connectors and cable entry systems, customized system solutions, automation technology and robotics solutions for the intelligent factory of the future, as well as technical accessories. The Lapp Group's core market is in the industrial machinery and plant engineering sector. Other key markets are in the food industry as well as the energy and the mobility sector.

Recommend Lapp down under: Full range of products now in Australia press release