LAPP is optimistic despite Coronavirus

Turnover falls by 7.7 percent, but there are positive signals in industrial data communication and photovoltaics 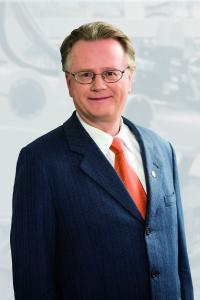 (PresseBox) ( Stuttgart, 21-03-02 )
In spite of the global economic disruption and the COVID-19 pandemic, LAPP proved relatively robust in getting through the 2019/2020 financial year. “Our response to the challenges was agile and innovative, enabling us to keep down economic losses”, says Andreas Lapp, Chairman of LAPP Holding AG. In the completed 2019/2020 financial year (October 1 to September 30), the global market leader for integrated cable and connection technology solutions saw its turnover fall by 7.7 percent to 1,128 million euros. The number of employees fell by 1.6 per cent to 4,575. Profit before tax decreased to 29.7 million euros. Andreas Lapp said: “Despite this drop in profits due to COVID, I am optimistic for the future. Our strategy of promoting digital transformation hand in hand with our customers has proved to be a stabilising factor during the time of the pandemic. I am particularly proud of our employees, who have shown great commitment and passion to ensure that we can satisfy and delight our customers even in this very difficult times.”

In addition to the economic effects of the pandemic, the decline in turnover was also influenced by lower copper prices (-3.1% on average over the year) and by exchange rate fluctuations. Adjusted for these factors, the decline in turnover was -6.5 percent, with relatively stable business performance in the first half of the financial year and a significant deterioration in quarters 3 and 4.

Stable sales in the Americas region

The development of sales revenues differed significantly by region. The EMEA region (Europe, Near & Middle East and Africa) is the strongest region in the LAPP Group, accounting for around 74 percent of turnover. In the last financial year, it generated 833.4 million euros, corresponding to a fall of 6.3 per cent compared to the previous year. Meanwhile, the Americas region (North, Central and South America) remained relatively stable compared to the previous year at 118.5 million euros. The APAC region (Asia Pacific including India) experienced a much sharper decline, closing the financial year at 176.4 million euros, down 17.3 percent. Here, the COVID-related disruption to sales markets started to have an impact much earlier in the year.

Investments in software and digitalisation projects

The investment volume for fixed and intangible assets was a total of 57.7 million euros, 13.8 million higher than the previous year. The main reason for the rise was the addition of usage rights under IFRS 16, amounting to 28.3 million euros. A total of 10.4 million euros was invested in intangible assets. Here, the focus was on software and digitalisation projects. Expenditure on fixed assets was 19.0 million euros. Particularly at the European locations, investments were made in buildings, machinery and equipment, logistics and strategic expansion of Lapp Mobility GmbH, which specialises in charging systems. In addition, a new 68,000 square metre logistics centre was opened in Hanover last autumn. A total of around one million euros was invested in shelf systems and a packaging plant.

The number of employees worldwide fell by 1.6 percent to 4,575 (previous year: 4,650 employees). The highest percentage decline was 5.9 percent in the North America region. In the LA EMEA region, the headcount remained almost constant. As in previous years, human resource development focused on ongoing training and qualification of employees, particularly in the field of digital transformation. LAPP benefited considerably from development work in previous years during the pandemic. Thanks to the fast adaptability and experience with using digital technologies, LAPP was able to maintain its operational capacity even in shutdown. “As a company, we responded very quickly and developed a concept to protect the health of our employees. Almost overnight we switched to home working and digital meetings and launched online shops in sales companies that didn't yet have them. Everyone worked together. That was and is fantastic to see,” says Andreas Lapp. Global human resource development was shifted to digital formats such as webinars and online training. At the same time, the “Tech Tuesday” concept enabled customers to take part in more than 20 webinars on topics such as industrial communication and technical expertise.

Digitalisation and Industry 4.0 are playing an increasingly important role for customers. In numerous countries and regions, for example in China, USA, Italy, Austria and Russia, LAPP was able to cope with the downturn and in some cases achieved double-digit growth in the industrial communication sector. “The growth in these main markets shows that the trend is persisting despite the pandemic. Overall, we had to cope with a fall of just one percent worldwide. The losses were therefore much lower than in other divisions, and the IC division turned out to be a key stabilising factor in these difficult times” explains Georg Stawowy, Member of the Board for Innovation and Technology. Therefore, this segment will continue to be the focus for the development of new Ethernet-based products and services in the future. “In our FutureLab, we have presented connection solutions and digital services that customers had never even thought of. These are innovations that will offer our customers major benefits in the age of digitalisation,” Georg Stawowy said.

There were also positive developments in the renewable energy sector. “Our growth in the ÖLFLEX® SOLAR product groups for photovoltaics was 23 percent. This is a clear indication that the energy revolution is continuing apace. With our connection solutions for renewable energy, we are ideally placed to benefit from this trend”, says Georg Stawowy.

The current 2020/2021 financial year will continue to be shaped by the pandemic. LAPP therefore expects business trends to be largely constant compared to the previous year. Andreas Lapp said: “We anticipate that the markets will only recover slowly. I suspect that we will only feel a sustainable upturn once the lockdown has ended and the population is sufficiently immunised. Like all companies at the moment, we are taking things one day at a time.”

LAPP has remained in continuous family ownership since it was founded in 1959. In the 2019/20 business year, it generated consolidated revenue of 1,128 million euros. LAPP (including also non-consolidated entities) currently employs approximately 4,575 people across the world, has 20 production sites and around 43 sales companies. It also works in cooperation with around 100 foreign representatives.