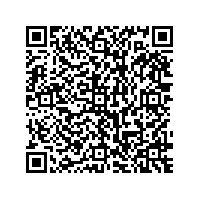 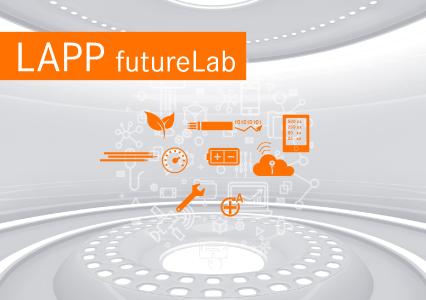 (PresseBox) ( Stuttgart, 19-10-08 )
The future of connection technology holds exciting and surprising innovations in store. They can be seen at the SPS 2019 trade show in Nuremberg in the futureLab, a specially designed part of LAPP's exhibition stand. The Stuttgart-based world market leader for integrated cable and connection solutions will provide an insight into the ideas currently being considered by LAPP's developers. Guido Ege, Head of Technology and Development at LAPP, says: "With the futureLab, LAPP underpins its claim as a technology leader”, and adds: "Some of the innovations presented are ready for the market and already available, others are functional prototypes".

Predictive maintenance for data cables
Predictive maintenance holds one of the great promises of Industry 4.0. The analysis of large amounts of data should detect defects before they happen and avoid expensive failures. In the futureLab the developers at LAPP present an innovative solution for monitoring the condition of a data cable. In contrast to other solutions, the LAPP concept does not require any changes to the cable, for example no additional wires that would have to be sperately connected by the user. Instead, an electronic device continuously monitors the signals transmitted by the cable and analyses their quality to calculate the LAPP Predictive Indicator. If this falls below a critical value, the electronics sounds an alarm. The cables can then be replaced during scheduled maintenance works, during retooling or similar. If LAPP cables are already in use (the electronics are designed for their electrical properties), it would even be possible to retrofit existing systems and machines. This predictive maintenance solution for data cables is a development project at LAPP; market maturity is planned for the near future, and LAPP is currently in talks with potential partners to test the technology.

Smart cable drum
How many meters of cable are left on the drum? The smart cable drum provides an amazingly clever answer. A sensor determines the remaining length of the drum when the cable is unwound and sends this information to the ERP system. If a defined minimum stock level is reached, an internal message or even an automatic reorder can be triggered. Other functions are also possible: If a GPS receiver is integrated, an automatic theft warning system, for example, is also easily feasible – such a feature is particularly interesting for large drums on construction sites. The smart cable drum was developed together with Schildknecht AG, the radio communication specialist for industrial applications. It exists as a prototype and is now being tested with partners.

Cables for the DC age
The energy supply of the future works with direct current (DC). Today, more and more electrical consumers, from LED lights to electric cars, are consuming direct current, and more and more systems that generate direct current, above all photovoltaics, are feeding electricity into the grid. However, our power grid is still based on alternating current. This means that numerous conversion processes between alternating current and direct current are necessary, and considerable energy losses occur in each case. The switch to using direct current throughout requires changes not only to machines and systems, but also to the cabling, because as research done by LAPP in cooperation with TU Ilmenau has shown, different insulation materials are sometimes necessary in DC applications. LAPP is the first company to offer standard cables specifically for industrial direct current applications. In the futureLab, LAPP will be showing the already available ÖLFLEX DC CHAIN 800 control cable and other new cables with different insulation materials optimized for DC applications. In recent years, LAPP has been a driving force behind this issue in the DC-Industrie research project. The project ended in September and DC-Industrie2 will soon be launched. LAPP, as a sponsored partner, will research the long-term stability of insulation materials for cables and wires.

Downsizing through Single Pair Ethernet
Until now, the rule for data cables in factories was: faster is better. But to connect individual sensors at the field level in the factory, Cat.6 or even Cat.7 cables are often oversized. Single-pair Ethernet cables are often the better alternative here. Instead of four wire pairs, they have only one pair, which saves up to 75 percent time when connecting the wires - and of course a cable with two wires also costs less than one with eight. In addition, these cables are thin, making them suitable for confined spaces. LAPP already has single-pair Ethernet cables in its range, and suitable connectors and devices that can use the new standard will soon be available.

Visitors who are interested in the future of fastening technology will find the futureLab at SPS Messe 2019 at LAPP's booth in Hall 2, Booth 310.