New focus for apprenticeships at LAPP 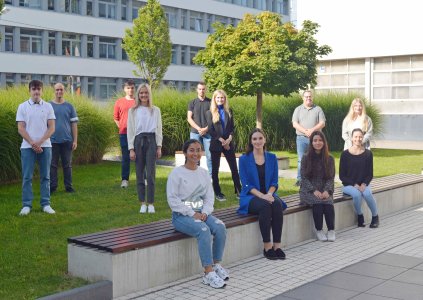 (PresseBox) ( Stuttgart, 21-09-15 )
26 women and men have started their dual vocational training at LAPP. This year, LAPP will place a new training focus on digital transformation. As a result, in addition to the “classic” apprenticeships, such as warehouse logistics specialists, mechatronics engineers and skilled trades, such as Business Administration-Industry and Industrial Engineering, field of study: Electrical Engineering, five new skilled trades are being offered: IT specialists for digital networking, business clerk for digital networking, as well as the dual courses in Business and Digitalisation Management, Digital Engineering & Management and Business Information Technology with a focus on International Management for Business and Information Technology.

“Education is very important to us. I consider this as a social responsibility that we are happy to assume. The digital professions in particular are currently in huge demand and have great prospects for the future,” emphasises Matthias Lapp, CEO of U.I. Lapp GmbH and adds: “For us, as a provider of connection solutions, digitalisation is also an important driving force in our core business. This is why it is so important to us to train our employees ourselves. This is an important tool for securing junior staff.”

The apprenticeship at LAPP began with a one-week introduction, where young career entrants were introduced to the training contents and the LAPP company. September 13th is the official start of work in their respective department. At the same time, LAPP also offers apprentices a variety of events and projects, such as trade fairs, social engagement or overseas assignments, in which they are actively involved. “Unfortunately, this was not possible last year due to the pandemic, but I really hope that we will be able to offer this diversity in training again. But it is clear that no compromises are made with a joint educational mandate from an apprenticeship institution, a vocational college or a dual college,” said Anne Voigt, Head of Training at LAPP.

A total of 75 people are currently being trained at LAPP across all three years of training/study. According to a recent survey by Statista and Capital magazine, LAPP is one of the "most attractive employers" in Stuttgart.

Headquartered in Stuttgart, Germany, LAPP is a leading supplier of integrated solutions and branded products in the field of cable and connection technology. The company’s portfolio includes standard and highly flexible cables, industrial connectors and cable entry systems, customized system solutions, automation technology and robotics solutions for the intelligent factory of the future, as well as technical accessories. LAPP’s core market is in the industrial machinery and plant engineering sector. Other key markets are in the food industry as well as the energy and the mobility sector.

LAPP has remained in continuous family ownership since it was founded in 1959. In the 2019/20 business year, it generated consolidated revenue of 1,128 million euros. LAPP (including also non-consolidated entities) currently employs approximately 4,575 people across the world, has 20 production sites and around 43 sales companies. It also works in cooperation with around 100 foreign representatives.