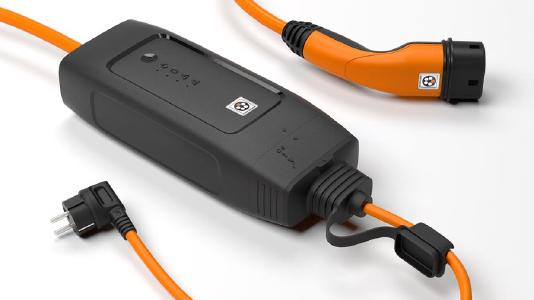 (PresseBox) ( Stuttgart, 17-08-09 )
The Lapp Group has always set standards with its technical innovations and high quality, but now they are increasingly doing the same with its exceptional design. A product from Lapp Systems has now been nominated for the German Design Award 2018 - the Mode 2 charging system with “In Cable Control and Protection Device” (IC-CPD), a “charging station to go” that allows electric vehicles to be charged using the conventional mains supply.

The German Design Award recognises manufacturers and designers of innovative products that are pioneering in the German and international design environment. This is ensured by an international jury made up of high-level experts. “The nomination reinforces our plans to place an increasing focus on design”, says Karl Knezar, the Head of Automotive Business at Lapp Systems. “A charging system has to blend harmoniously into the overall vehicle concept”. “Even making it onto the shortlist is a huge honour”, says a delighted Sven von Boetticher from the Stuttgart design firm ID AID, which is responsible for the design of the charging system and has already developed a number of projects for Lapp Systems, including charging systems for BMW.

The nomination for the Mode-2 charging system with IC-CPD is sure to contribute to the spread of electric mobility. To date, car manufacturers have tended to neglect charging from a domestic socket - known as Mode-2 charging - and viewed it as an emergency solution. But the industry has now recognised that this type of charging will be hugely important in the future. Alongside the technology, achieving widespread acceptance calls for a successful design, easy handling, excellent convenience and identification with the car manufacturer's brand.

This gap is precisely where Lapp has positioned itself with its charging system with IC-CPD, which features numerous technical innovations such as higher charging currents and electrical protection functions. Among the highlights are the interchangeable mains cables, which allow drivers to connect to numerous types of sockets worldwide. Locking the mains cable on the box, where a sliding mechanism enables it to be intuitively released in just two steps, is a great example of how form and function have been combined. This is what the German Design Award is all about, assessing criteria such as functionality and operability, design quality and level of innovation.

Brand value and branding are explicitly mentioned in the assessment categories. Lapp is going in a new direction here. The charging system is designed to enable car manufacturers to incorporate their own design and integrate it into the brand experience. Lapp Systems is the first manufacturer to consistently offer this, and the design prize nomination shows it has been a success. According to Karl Knezar, a major order from the first customer – a renowned premium manufacturer - is currently using up all of Lapp Systems’ production capacity, with other manufacturers already expressing considerable interest.

The IC-CPD is due to be launched in 2018. A smartphone app with a range of convenient functions is also planned for the third quarter of 2018.