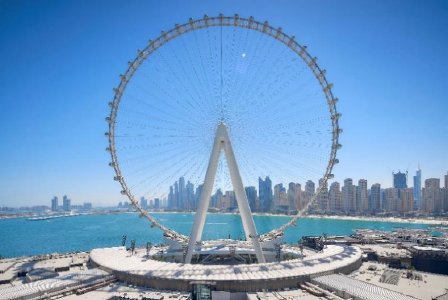 (PresseBox) ( Munich/Dubai, 21-10-26 )
Standing at a staggering height of over 250m, Ain Dubai is the world’s tallest and largest observation wheel. TÜV SÜD has accompanied the realisation of the megaproject from its very beginning – from the initial concept to acceptance testing in August 2021.

Dubai is known for its spectacular construction records. Ain Dubai is a further superlative on the emirate’s long list of record-breaking structures. The world's tallest and largest observation wheel has now been taken into operation on the island destination, Bluewaters. At a towering 250 m, the Ain Dubai rises high above its competitors. The axle with the two hubs alone is 40m long, 20m high and weighs over 1,800 tonnes. 11,200 tonnes of steel were used in its construction – one-third more than the quantity used to build the Eiffel Tower. Ain Dubai has 48 cabins for which have the capacity to host 1,750 visitors simultaneously.

TÜV SÜD has been involved in the realisation of the megaproject right from the start. Dubai Holding had commissioned the international provider of testing and certification services to supply end-to-end assistance with project realisation from the concept and design stages, spanning inspections during manufacturing, construction supervision and final acceptance testing. “Our work was based on the internationally recognised EN 13814 standard, which defines requirements for the planning, construction, operation and inspection of ‘temporary structures’”, explains Ralf Distler. Distler, who was the Ain Dubai project lead at TÜV SÜD, can look back over a successful track history in accompanying large-scale projects. However, even for him the Ain Dubai was a very special case. “So many suppliers were involved in the realisation and had to be coordinated continually”, he recalls. The suppliers of the subsystems and the factories manufacturing them were spread over ten countries throughout Asia and Europe, turning the scheduling of factory production control and coordination on the construction site into a major challenge.

In modern temporary structures like Ain Dubai, the electronics of the control systems and the safety functions are of central importance. “Given this, our inspections during installation also included intensive software testing”, points out Distler. “Among other aspects, this software testing was used to verify that the interfaces between components made by different manufacturers worked as intended and that the functional safety of the overall system was ensured.” After a construction period of eight years and successful acceptance testing by TÜV SÜD, operation of the Ain Dubai was ceremonially announced to officially open on 21 October 2021.

TÜV SÜD is one of the world’s leading providers of testing an inspection services for amusement parks and rides. The company’s engineers provide initial and periodic inspections of amusement parks and rides in countries including Denmark, France, Italy, Sweden, the USA and Canada as well as Japan, Saudi Arabia and Dubai. Since 1929, the experts have also inspected all temporary rides and structures requiring approval at the Munich Oktoberfest.

About Ain Dubai
Ain Dubai is the world’s largest and tallest observation wheel, standing at over 250 metres. The record-breaking monument offers unrivalled and unforgettable social and celebratory experiences as well as 360-degree views of Dubai in premium comfort – all at heart of Bluewaters, the sophisticated, must-visit island destination. The 48 passenger cabins that circle the enormous circumference of the wheel have capacity to carry more than 1,750 visitors at once.
A prestigious asset of Dubai Holding’s entertainment portfolio, Ain Dubai has quickly become recognised as one of the Middle East’s most remarkable landmarks which has elevated the aesthetic of Dubai’s skyline. The world-class, landmark entertainment venue delivers extraordinary and customisable one-of-a-kind experiences for every occasion. Ain Dubai plays a strategic role in supporting Dubai’s long-term vision to strengthen its global position as a key tourism hub, continuing to build on the emirate's reputation as a leader in the global leisure and entertainment landscape.
To find out more, please visit https://www.aindubai.com/ @aindxbofficial

Founded in 1866 as a steam boiler inspection association, the TÜV SÜD Group has evolved into a global enterprise. More than 25,000 employees work at over 1.000 locations in about 50 countries to continually improve technology, systems and expertise. They contribute significantly to making technical innovations such as Industry 4.0, autonomous driving and renewable energy safe and reliable. www.tuvsud.com

TÜV SÜD is quality management partner of the aviation industry