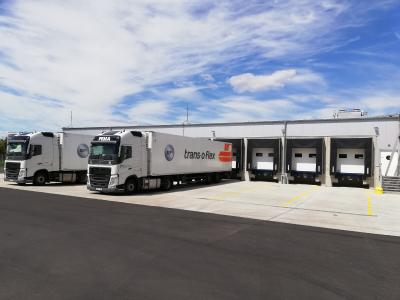 (PresseBox) ( Weinheim, 21-03-15 )
trans-o-flex ThermoMed, market leader for the fine distribution of actively temperature-controlled medicines at 2 to 8 degrees Celsius in Germany, is about to complete the expansion of its central handling facility, increasing the capacity of its entire network by more than 25%. "The capacity expansion is a signal at exactly the right time," says trans-o-flex CEO Wolfgang P. Albeck. "Because there is currently a discussion about how the logistics of the Covid-19 vaccines can be made more efficient. And one possibility would be to replace the vaccine distribution, which has so far been organised individually by each of the 16 federal states, with a uniform nationwide solution." According to Albeck, trans-o-flex ThermoMed could supply all vaccination centres, hospitals, pharmacies and doctors' surgeries across Germany with vaccines overnight. So far, the company has only been commissioned with the distribution of the various Covid-19 vaccines to the vaccination centres in Bavaria.

For the trans-o-flex CEO, the advantages of organised vaccine distribution throughout Germany are obvious: "With a nationwide distribution via one network, the administrative workload for the contracting authorities is effectively reduced. This is because one solution can be used for all the federal states. An impact would be achieved if just two federal states were to join forces. And the impact would increase the more federal states were to adopt the solution." In addition, Albeck adds, the nationwide solution would enable a uniform standard for deliveries throughout Germany. "And not only at vaccination centres, but also at pharmacies, hospitals or at doctors' surgeries, old people's homes and nursing homes." trans-o-flex ThermoMed delivers to all these almost daily. "Accordingly, trans-o-flex could take delivery of the vaccines at a single location or at different locations in Germany, handle the commissioning for the individual vaccination centres and guarantee delivery within 24 hours, with deliveries before 8 or 10 a.m. if required." Last but not least, the possible bundling of shipments would increase the utilisation of the vehicles. "This is good for the environment and reduces transport costs."

The demand for actively temperature-controlled pharmaceutical shipments has been steadily rising throughout Europe for years. "In other EU countries like Austria, Italy or Spain it has long been standard, in Germany we are well on the way to achieving this," says Albeck. The hub expansion was an early response to this, even before the coronavirus pandemic. It is a "fortunate circumstance" that there is now sufficient reserve capacity to safely distribute both the current and the expected future vaccine quantities nationwide in Germany. "Our network is made for such tasks, there is nothing else like it and we now have reserves for further growth."

The expansion of the central handling facility took place in parallel with the ongoing operation of the sorting centre. First, another warehouse section was added to the existing building. Once the interior construction of the new section of the building had been completed, including temperature mapping and the installation of a new sorting system, the wall between the old and new sections of the hub was removed. The warehouse area of the central hub thus increased from 1,300 to almost 2,000 square metres, the number of loading bays by 20 to 41. The new, fully automatic sorting line, whose acceptance will mark the official completion of the construction work, has further reduced the handling time. Since all trans-o-flex ThermoMed consignments are currently handled in the central hub, the expansion increases the capacity of the entire network.

trans-o-flex core areas of expertise are logistics solutions for the pharmaceutical, cosmetics and consumer electronics industries and for other high-end, sensitive goods. The company has built up transport networks that convey goods at 15 to 25 degrees Celsius or at 2 to 8 degrees Celsius actively temperature-controlled and documented in accordance with EU regulations for the transport of pharmaceuticals. These EU-GDPs require the highest standards for safety and security, cleanliness, reliability and transparency, from which all trans-o-flex customers benefit. trans-o-flex operates internationally via the networks EUROTEMP (temperature-controlled logistics) and EURODIS (in 36 European countries). In contrast to conventional parcel services or forwarding agencies, trans-o-flex delivers goods in parcels as well as on pallets. trans-o-flex Express also offers numerous express and time-slot deliveries, special services such as dangerous goods transportation (without minimum quantity regulation), consignment consolidation or direct deliveries. The express shipments are complemented by warehousing, order picking and individual value-added services such as serialisation of pharmaceuticals. This means that the company covers the entire logistics chain from procurement through to fulfilment. The annual business volume of the trans-o-flex companies, which employ a total of around 2,150 people, amounted to around 515 million euros in 2020. More information is available at www.trans-o-flex.com.