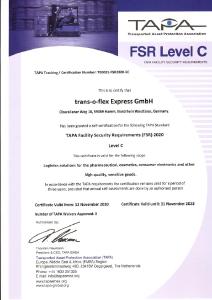 (PresseBox) ( Weinheim, 20-12-17 )
trans-o-flex Expressdienst has now also received certification from the global security organisation TAPA for its new transhipment centre in Hamm-Rhynern, Westphalia, which only opened in May this year. The Transported Asset Protection Association (TAPA) is an independent organisation supported by consignors that has established the highest security standards in transportation worldwide. The latest TAPA standard FSR-C 2020 was implemented at the Hamm site. "This standard is more demanding than anything in ISO quality management in terms of security requirements. It is the ideal basis for the further development of our security processes and technology," explains Wolfgang P. Albeck, CEO of trans-o-flex.

Hamm is the second site that trans-o-flex has had certified according to the TAPA standard. In 2019, trans-o-flex Expressdienst had already received a TAPA certificate for its site in Hürth near Cologne. "We have now passed the first interim audit there," explains Albeck. The certification process has to be completely reviewed every three years, with an annual audit of the processes being required each year in between. "By 2022, Hürth will already be due for recertification according to the latest TAPA guidelines." Albeck anticipates that in the meantime other sites will also receive TAPA certification, following the example of Hürth and Hamm.

"The highest security standards are vital for a company that specialises in the transportation of sensitive goods," says the company boss. "But it is almost as important to document the level achieved to the outside world." For this reason, trans-o-flex is continuing its strategy of gradually certifying its sites according to TAPA standards.

Certification requires all security-relevant processes to be described. Clearly defined technical security installations are required. Both are audited annually. Last but not least, all persons involved in transportation and handling must regularly undertake security training. TAPA, founded by discerning consignors, also makes very specific constructional demands, for example on fences, access regulations and video surveillance. The Hürth and Hamm sites have also been equipped with a new video management system, for example, which allows a targeted and rapid search for individual consignments.

trans-o-flex core areas of expertise are logistics solutions for the pharmaceutical, cosmetics and consumer electronics industries and for other high-end, sensitive goods. The company has built up transport networks that convey goods at 15 to 25 degrees Celsius or at 2 to 8 degrees Celsius actively temperature-controlled and documented in accordance with EU regulations for the transport of pharmaceuticals. These EU-GDPs require the highest standards for safety and security, cleanliness, reliability and transparency, from which all trans-o-flex customers benefit. trans-o-flex operates internationally via the networks EUROTEMP (temperature-controlled logistics) and EURODIS (in 36 European countries). In contrast to conventional parcel services or forwarding agencies, trans-o-flex delivers goods in parcels as well as on pallets. trans-o-flex Express also offers numerous express and time-slot deliveries, special services such as dangerous goods transportation (without minimum quantity regulation), consignment consolidation or direct deliveries. The express shipments are complemented by warehousing, order picking and individual value-added services such as serialisation of pharmaceuticals. This means that the company covers the entire logistics chain from procurement through to fulfilment. The annual business volume of the trans-o-flex companies, which employ a total of around 2,200 people, amounted to around 495 million euros in 2019. More information is available at www.trans-o-flex.com.

trans-o-flex and AUTOWELT.EBERT make a donation of green mobility for youth welfare

Wolfgang P. Albeck to remain CEO of trans-o-flex for another three years