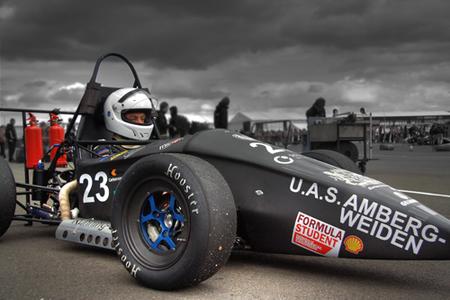 (PresseBox) ( Amberg, 10-12-13 )
The Running Snail Racing Team enjoyed an extremely successful season, following the rollout of the new RS10 racing car in May.

It won "first place overall" on August 22 in Györ, Hungary. This meant that the Running Snail Racing Team, sponsored by the TraceParts, achieved the best result so far in its history, by taking first place overall in a Formula Student race series competition.

The team even managed to improve its position in all competitions during the races at Silverstone (England), Hockenheim (Germany) and Varano de Melegari (Italy). One particular highlight is the result in England where the Running Snail Racing Team moved up 16 places compared to last year's race. Coming 4th overall out of a total of 89 teams taking part, the Running Snail Racing Team just missed out on a place on the podium.

An award from Airbus for the car with the best light construction concept which was able to complete the endurance race.

An award for the car with the best drive concept, sponsored by BMW. This involved an assessment of innovation and competitiveness in terms of motor and powertrain.

TraceParts GmbH wishes at this point to extend its warmest congratulations and hopes that the Running Snail Racing Team will get off to another successful start in the 2011 racing season.

The Formula Student is an international engineering competition that was founded in the US in 1981 and is now held in seven different countries each year. The main organizer is the largest engineering association in the world, the SAE (Society of Automotive Engineers).

The Formula Student is based on the idea that a company places an order for the construction of a race car prototype for amateur race car drivers. The vehicle has to fulfill certain requirements and therefore the competition is conceived in such a way that all aspects are evaluated, from the design to the cost control and from the marketing to the practical usability.

Static events: Static events involve analyses of the production process and account for around a third of the total number of points. This also includes the Engineering Design Event, in addition to individual disciplines such as the Cost Analysis Event, for example, where the teams have to provide total costs for building a vehicle as part of a low-production volume of 1,000 units, according to a predefined process cost key. In this case, the car's design is inspected by jurors, and the students must justify and defend the design decisions they made.

Skid pad: The skid pad is a horizontal figure eight whose circles have a diameter of 15.25 m. Each team may provide two drivers who have two tries each. The quickest try is the one that is evaluated.

Acceleration: The acceleration competition measures the acceleration of the car. The vehicle is accelerated from a standing position for 75 m. Each team may provide two drivers who have two tries each. The quickest try is the one that is evaluated.

Autocross: The car has to be steered along a handling course that is 800 m long. It includes straight lines, hairpin turns and slalom sections. Each team may provide two drivers and each driver has two tries. The quickest try is the one that is evaluated. The drivers do not have a training round.

Endurance: The endurance competition is the most important one. The vehicle has to be steered along a circular course that is 22 km long and resembles an autocross. The driver is changed after 11 km. In this process the engine and ignition have to be switched off and then start again without outside help. Usually several race cars are on the track at the same time, which however do not race against each other but against the clock. Special passing zones are furnished for faster cars. This competition is so important because it results in more than a third of all points and because nearly half of the cars do not make it through the entire 22 km.

TraceParts is a leading digital engineering 3D content company, offering customers progressive business solutions through powerful web based products and services. TraceParts brings targeted and cost-effective market penetration to parts vendors, in all sectors of the industry. As part of the Trace Software Group founded in 1989, TraceParts develops and markets software solutions for CAD parts libraries, electronic catalogs and product configurators specially designed to meet the requirements of the mechanical industry. TraceParts helps customers improve marketing efficiencies by increasing the value of their existing digital product data. The tracepartsonline.net CAD portal is freely available to millions of CAD users worldwide, with more than 200 manufacturers' catalogs and 100 million CAD drawings and related technical data suitable for the design, purchasing, manufacturing or maintenance processes.