The new generation of ARM Cortex™ modules: Energy-efficient, scalable and powerful thanks to the new CPU technology 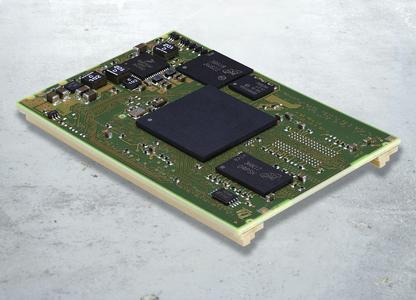 (PresseBox) ( Seefeld, 15-02-25 )
With the TQMa7x and TQMa5xxx, TQ is planning two Minimodules using the new processor families based on ARM Cortex™-A7 and ARM Cortex™-A15. By the specific selection of technology, TQ is creating a forward-looking basis so that it can continue to support its customers with innovative ARM products.

With the TQMa7x an optimized ARM Cortex™-A7 Core with up to 1GHz is used. This CPU can achieve processing power which is not to be underestimated at very low power loss. Two versions are intended which mainly differ in the fact that there is one single core and one dual core version.

On the second module, TQMa5xxx, an ARM Cortex™-A15 core with up to 2x 1.5GHz is planned. A single core and dual core version is also planned for this CPU. A very powerful graphics card is also integrated. In combination with the excellent CPU performance and graphics output, the module can also be used in areas where the graphics and processing performance are important alongside fast data communication. For industrial control units, support from diverse field bus applications can be used.

Both modules are ideal as a platform concept across different departments due to the scalability. Companies can therefore reuse know-how they have already acquired. In many projects they save not just valuable time, but also reduce the costs during development.

Due to the small installation space of just 54mm x 40mm (TQMa7x) and 60x54mm (TQMa5xxx), the ARM modules are also an ideal platform for applications relating to industrial control units, M2M and internet-of-things (IoT) gateways. With the camera interfaces integrated into both processors, system developments can also be made which put high demands on applications with direct camera connections. This brings an enormous cost benefit.

All external signals of the CPUs are provided via industrial-standard terminal strips in a 0.8mm grid, which have been tried and tested at TQ for more than 15 years.

On the embedded modules, RAM with up to 2GByte DDR3L, 512 MByte Quad SPI NOR Flash and up to 32 MB eMMC Flash is planned for programs and data. In addition an EEPROM and a battery-buffered real time clock are also to be implemented.

With these designs TQ will expand its product range to include a CPU architecture based on ARM Cortex™-A7 and ARM Cortex™-A15. All customers and interested parties of TQ also receive support for these products with the usual reliability and quality of designs.

As an electronics service provider (E²MS supplier and CEM) TQ offers the complete range of services from development, through production and service right up to product life cycle management. The services cover assemblies, equipment and systems including hardware, software and mechanics. Customers can obtain all services from TQ on a modular basis as individual services and also as a complete package according to their individual requirements. Standard products such as finished microcontroller modules (minimodules), drive and automation solutions complete the range of services.

Recommend The new generation of ARM Cortex™ modules: Energy-efficient, scalable and powerful thanks to the new CPU technology press release