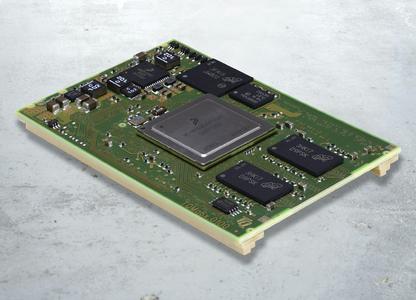 (PresseBox) ( Seefeld, 13-11-28 )
The TQMa6x, based on the ARM processor family i.MX6 by Freescale, is a scalable minimodule in computing power and graphic performance. Several display interfaces offer the highest flexibility for applications, in which several displays are required.

The module is an optimal core for applications in medicine with its variety in interfaces and its scalable performance at dimensions of only 70mm x 46mm and low power consumption. Several variations can be used from the CPU for any application from Single Core up to Quad Core.

Special attention is to be paid to the internal graphics controller. It supports displays with a resolution of up to Full HD. Simultaneous connection of up to four displays with the option of showing various images is also possible with this CPU module. That is why the module is most suited for animated screen or multi-touch and multi-display applications apart from the conventional control tasks.

All externally usable signals of the CPU are available over three industrial-suited cable connectors (2x 160 + 1x 40 Pins) on a 0.8 mm grid, which has been tried and tested at TQ for more than 15 years.

360 pins provide the user with Gigabit Ethernet USB Host / USB OTG controller and three UARTs and also two CAN 2.0B. Furthermore the user profits from a variety of LCD interfaces for integration of parallel as also single/dual LVDS displays. In addition a HDMI port can be used to connect a monitor. Other functional units can be connected using the parallel address/data bus, SDIO, SPI, 12C and PCIe.

The TQMa6x has a memory storage of up to 2GByte DDR3L and up to 128 MByte SPI NOR Flash as well as up to 16GB eMMC Flash to implement programs and data. The design is supplemented with an EEPROM, a RTC and a real-time clock backed by battery from the mainboard.

The TQMa6x impresses by a product life-cycle of up to 15 years.

This module is suitable for a number of medical applications on account of its high interface integration, in which the advantages of visualization can be used. The optimal performance can be selected for each application with the ARM Cortex™-A9 core and a clock rate of up to 4x1.2 GHz.

The customer can use a number of qualified activation scenarios. A second Ethernet controller comes with the starter kit.

A Linux BSP is provided for the module and mainboard specific interfaces. TQ can also offer other operating systems like QNX, VxWorks as also Wind River Linux on request. In the region of display application TQ has found a strong partner in the software enterprise Pengutronix, who provides the necessary know-how.

TQ expands its product spectrum with a scalable Cortex™-A9 module with a very powerful design. All customers and those interested in TQ will be supported in this product with the customary reliability and quality in the designs.

The TQMa6x with its convincing properties offers the best prerequisites for the development of medical products whether for an operating unit with several displays or for applications which require a scalable computational power.

As an electronics service provider (E²MS supplier and CEM) TQ offers the complete range of services from development, through production and service right up to product life cycle management. The services cover assemblies, equipment and systems including hardware, software and mechanics. Customers can obtain all services from TQ on a modular basis as individual services and also as a complete package according to their individual requirements. Standard products such as finished microcontroller modules (minimodules) and drive solutions complete the range of services.