TQMa53 – The Cortex™ A8 module with high-performance graphics 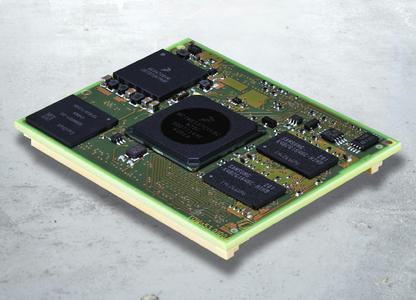 (PresseBox) ( Seefeld, 12-02-29 )
The TQMa53, based on the Freescale i.MX537 ARM processor, sees TQ launch an affordable, extremely compact yet high-performance Minimodule on the market. A starter kit comprising a mainboard, module and accessories helps customers develop many system solutions.
Due to its variety of interfaces for its very small size (56 mm x 44 mm), as well as its low power consumption, the module provides the perfect core for applications from the fields of human machine interfaces (HMIs) and industrial controls. Particular focus lies on the internal graphics controller, which supports displays with a resolution up to UXGA. Apart from conventional control tasks, the module is thus also ideal for animated screen/multi-touch applications.
Users can communicate via two CAN 2.0B, as well as 10/100 Mbit Fast Ethernet, USB-Host / USB-OTG-Controller and three UARTs, thanks to two robust industrial terminal strips (2 x 120 pins) in a 0.8-mm grid. They also benefit from a number of LCD interfaces designed to connect parallel and single/dual LVDS displays. A VGA port can similarly be used to connect a monitor, while other functional units can be connected via the WEIM Bus, SDIO, SPI and I2C.
A main memory with up to 1 GB DDR3 and up to 32 MB, as well as up to 32 GB eMMC Flash for programs and data, has been fitted on the TQMa53. The design is further supplemented with an EEPROM, a supervisor/watchdog, and a real-time clock battery-backed from the motherboard.
Existing debugging tools can be used for software development, which is made comfortable and effective by the JTAG access. The TQMa53 also impresses with a product lifecycle of up to 15 years.
The high degree of interface integration means this module is suitable for a number of application areas, such as machine controls, utilities, building automation, automotive engineering and railway technology, medical technology and instrumentation. The starter kit enables users to apply a wide variety of qualified activation examples. A further Ethernet controller was recently specified for the starter kit, which can incidentally also be used as a mainboard by omitting the additionally populated pin headers where all module pins are placed for evaluation.
A Linux BSP was specified for the module-specific and mainboard-specific interfaces. Plans are also being made to adapt WIN EC7, Android, QNX and VxWorks.
The compact, reasonably priced TQMa53 sees TQ expand its product range to include a Cortex™-A8 module. The first starter kits are planned for early April 2012 and can be pre-ordered now.

As an electronics service provider (E²MS supplier and CEM) TQ offers the complete range of services from development, through production and service right up to product life cycle management. The services cover assemblies, equipment and systems including hardware, software and mechanics. Customers can obtain all services from TQ on a modular basis as individual services and also as a complete package according to their individual requirements. Standard products such as finished microcontroller modules (minimodules) complete the range of services.
Through the combination of electronics services and finished system components, TQ offers customer-specific products as ODM products and thereby addresses customers who would like to receive finished products and at the same time benefit from the advantages of a customer-specific solution. ODM products are provided on time and economically using a comprehensive solution kit. The kit includes finished electronic, mechanical and software components including certification and licenses.
The TQ Group employs more than 900 colleagues at their sites in Seefeld, Murnau, Peißenberg, Peiting, Wetter/Ruhr, Chemnitz, Fontaines (Switzerland) and Shanghai (China).
Further information on TQ can be found at www.tq-group.com