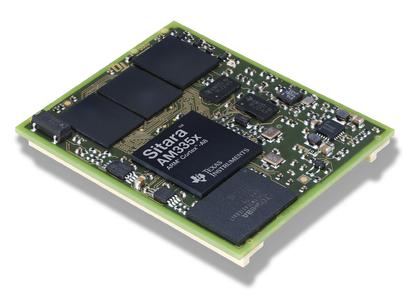 (PresseBox) ( Seefeld, 13-02-27 )
With the TQMa335, based on the ARM processor family AM335x from Texas Instruments, TQ-Systems has created a high-performance minimodule with two integrated PRUs. A starter kit consisting of a mainboard, module and accessories will support customers in the development of diverse system solutions.

On the TQMa335 it is intended that all available CPU versions - from AM3352 to the AM3359 - will be able to be used. They differ from each other primarily in the processing power offered as well as in their functioning. As a result the user has a processor module which has been optimised in price and performance to different applications. The processing power ranges from 300MHz to 800MHz.

Due to the functions integrated in the CPU, various applications can be run which do not place an additional burden on the processor like normal derivatives. Processing operations are outsourced to this component in the sub system where they are processed in real time. Low level driver field bus applications such as EtherCat, ProfiNet and ProfiBus, provided by TI, can also be processed via the PRUs.

With the graphics controller present in the AM335 and the optional 3D graphics support, display applications can be run with a resolution of up to WXGA (1366x768). Thanks to these characteristics, demanding and innovative operating concepts can be implemented at a reasonable price.

Using two industrial connecting strips which have been tried and tested for years at TQ (2x 120 pins) on a 0.8mm grid, all the externally usable signals of the CPU are available to the user.

With a total of 240 pins the user can also use two CAN 2.0 for communication, in addition to 2x gigabit Ethernet, USB host/USB-OTG controllers and up to 6 UARTs. Further functional units can be linked via SDIO, SPI, I2C and McASP. Up to eight 12 bit ADCs expand the areas of application.

On the TQMa335 a working memory has been established with up to 512MByte DDR3L and up to 128MBtye SPI NOR flash as well as up to 16GB eMMC flash for programs and data. The design is supplemented by an EEPROM, an RTC and a real time clock which is battery-buffered from the motherboard.

Due to the high interface integration, this module can be used in a wide range of applications such as machine control systems, building services, building management systems, in vehicle and railway technology as well as in medical and measuring technology.

With the starter kit, users have a wide range of qualified connection options. Here two industrial-standard CAN connections and one RS485 connection are provided alongside two Ethernet ones. All of the module signals not used on the starter kit are placed on a pin strip for the user to use for evaluation purposes.

A Linux BSP is intended for the module and mainboard-specific interfaces. A calibration of WIN EC7, Android and QNX is also planned.

With these industrial standard designs TQ has expanded its product spectrum with a Cortex(TM) A8 module. With this product, all customers and interested parties of TQ are also supported in the implementation of their project with the reliability and quality they are used to.

As an electronics service provider (E²MS supplier and CEM) TQ offers the complete range of services from development, through production and service right up to product life cycle management. The services cover assemblies, equipment and systems including hardware, software and mechanics. Customers can obtain all services from TQ on a modular basis as individual services and also as a complete package according to their individual requirements. Standard products such as finished microcontroller modules (minimodules) complete the range of services.