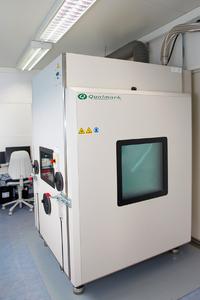 (PresseBox) ( Seefeld, 12-02-29 )
System service provider TQ has expanded the production equipment at the main headquarters in Seefeld, near Munich/Germany, to include a Qualmark Typhoon 3.0 HALT/HASS/HASA test system. TQ customers benefit from this new service both during the product development phase and during series production.
The Highly Accelerated Life Test (HALT) is carried out during a product’s development phase: In the test chamber, the module is exposed to alternating high and low temperatures. The temperature is gradually increased respectively reduced during the test until faults occur. To better simulate the stress conditions in the field, a vibration up to an acceleration of 70 grms can also be simultaneously activated through all three axes. The chamber is cooled using liquid nitrogen, enabling temperature gradients of up to 70°C – 100°C/min to be achieved. The chamber’s temperature range is between +200°C and 100°C.
Georg Unterlugauer, head of Quality Management, sums it up: „The HAL test allows us to assess the product’s durability and robustness, and thus avoid malfunctions later on in the field. We identify weaknesses early on and rectify these as early as the product creation phase, because the test results are directly incorporated into further development of the module.”
The Highly Accelerated Stress Audit (HASA) is carried out in-process as a sample test, and builds on the results from the HALT. In the HASA, the modules are again exposed to a defined stress (temperature, vibration), but this time with the aim of detecting production errors and weaker components. If necessary, or in the event of extreme demands on the product, a Highly Accelerated Stress Screening (HASS) can also be conducted as a 100% test in series production.
“We have so far contracted external institutes to conduct the HALT/HASA. With our own test system, we are now more independent and can also take measures during series production runs if required”, says Georg Unterlugauer. He is convinced that the new test system has quickly paid for itself: “Our customers have noticed the benefit of safeguarding their product’s development using a HAL test. HASA and HASS are of interest to many of our customers: The risk of errors slipping in (as is expected in electronics production) for small batches and complex modules is reduced. HASS reassures the customer of the optimum production quality and robustness of its module.”

As an electronics service provider (E²MS supplier and CEM) TQ offers the complete range of services from development, through production and service right up to product life cycle management. The services cover assemblies, equipment and systems including hardware, software and mechanics. Customers can obtain all services from TQ on a modular basis as individual services and also as a complete package according to their individual requirements. Standard products such as finished microcontroller modules (minimodules) complete the range of services.
Through the combination of electronics services and finished system components, TQ offers customer-specific products as ODM products and thereby addresses customers who would like to receive finished products and at the same time benefit from the advantages of a customer-specific solution. ODM products are provided on time and economically using a comprehensive solution kit. The kit includes finished electronic, mechanical and software components including certification and licenses.
The TQ Group employs more than 900 colleagues at their sites in Seefeld, Murnau, Peißenberg, Peiting, Wetter/Ruhr, Chemnitz, Fontaines (Switzerland) and Shanghai (China).
Further information on TQ can be found at www.tq-group.com