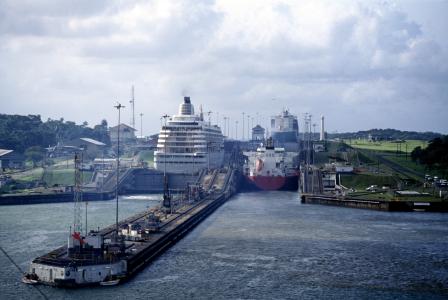 (PresseBox) ( Essen, 16-07-21 )
The expansion of one of the world’s largest engineering projects was recently completed in Central America: the Panama Canal is a strategic route for global navigation, connecting the Atlantic and Pacific oceans. Opened for the first time a little over 100 years ago and redesigned to expand its capacity, the canal has been made deeper and larger to allow the passage of ships three times larger than before, called the “New Panamax.”

thyssenkrupp supplied 14 innovative elevators for this project, seven for each new lock complex, one of which is on the Atlantic side and the other on the Pacific. Traffic through the locks will be monitored from two control towers that can be accessed via two elevators. The other elevators are installed at several points along the locks. “The elevators descend to a depth of roughly 50 meters and are then connected by tunnels known as “crossunders” running beneath the lock chambers, which hold millions of liters of water,” said Peter Bjorn, Vice President of New Installation & Modernizations with the Elevator Technology business division of thyssenkrupp for Latin America.

thyssenkrupp supports major infrastructure projects around the world with smart solutions that meet the requirements of urbanization. “We want to jointly address the challenges of mobility in complex environments with our customers,” says Andreas Schierenbeck, CEO of thyssenkrupp Elevator. “It is essential to find new solutions and create means for global transportation which save time and reduce the consumption of energy and environmental resources.”

The canal’s expansion plan comprised creating a new set of locks parallel to the existing ones, which could be operated at the same time. The construction of two new Atlantic and Pacific lock complexes, each approximately 1,200 meters long, was essential for the success of the project.

The complexity of the project required the thyssenkrupp team to consider a high level of technical detail. For instance, all elevator components had to be explosion proof to guarantee maximum availability even under the harshest of climatic conditions. In Panama, the canal construction is the first to be fitted with this safety feature.

Given the short five month installation timeframe and the project’s challenges, thyssenkrupp deployed 24 people to install the elevators. “The completion of this project makes us very proud and shows the high level of proficiency of thyssenkrupp teams working on milestone projects across the world,” Peter Bjorn said.

The Panama Canal Expansion required six years of research, including more than 100 economic viability studies, as well as details on market demand, environmental impact, and other technical engineering aspects. Construction began in 2007 and cost USD 5.4 billion (approximately BRL 18.2 billion). Doubling the capacity of the canal will have a significant impact on economies and international maritime trade.

thyssenkrupp
thyssenkrupp is a diversified industrial group with traditional strengths in materials and a growing share of capital goods and services businesses. Around 155,000 employees in nearly 80 countries work with passion and technological expertise to develop high-quality products and intelligent industrial processes and services for sustainable progress. Their skills and commitment are the basis of our success. In fiscal year 2014/2015 thyssenkrupp generated sales of around €43 billion.