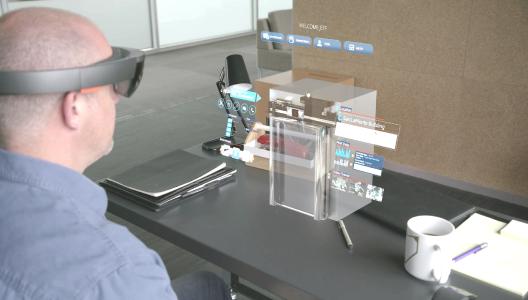 (PresseBox) ( Essen, 16-09-15 )
.
thyssenkrupp today announced its use of Microsoft HoloLens technology in its elevator service operations worldwide. The special mixed reality device is set to empower more than 24,000 of the company’s service technicians to do their jobs more safely and efficiently, and keep people and cities moving better than ever before. Currently, the global elevator service industry is valued at over $US 44 billion/year[1] and more than 12 million elevators transport over 1 billion people each day.

Using HoloLens, service technicians will be able to visualize and identify problems with elevators ahead of a job, and have remote, hands-free access to technical and expert information when on site – all resulting in significant savings in time and stress. Initial field trials have already shown that a service maintenance intervention can be done up to four times faster than before by using the device.

Andreas Schierenbeck, CEO of thyssenkrupp Elevator said: “With elevators transporting over one billion people each day, the service industry has a critical role to play in keeping cities moving. We remain focused on leading the transformation in this industry; introducing the latest technologies, processes and training to enable technicians to do a better job with less stress and more fun. Our goal is to dramatically increase efficiency, raise elevator uptimes and speed up service interventions to ensure mobility equipment is always running as it should, providing each passenger with the safest and most comfortable travel experience possible."

Commenting on Microsoft Corp., he added: “This application of HoloLens in our service operations was made possible through our collaboration with Microsoft, and the close integration with their software experts has even allowed us to explore dedicated HoloLens apps to meet thyssenkrupp’s specific requirements.”

Sam George, Partner Director, Microsoft Azure IoT, added: “The successful launch of IoT-enabled MAX was the first step in thyssenkrupp’s journey to not only transform their business but also its 100-year-old industry. Predictive maintenance, powered by Microsoft Azure IoT, enabled thyssenkrupp to offer time savings to worldwide elevator passengers equivalent to 95 million hours of new availability per year of operation. Today, we are proud to have once again collaborated with thyssenkrupp to bring another game-changing solution to market together.”

Scott Erickson, General Manager for Microsoft HoloLens, commented: “As the first fully self-contained holographic computer running Windows 10, Microsoft HoloLens has been helping companies and industries innovate in entirely new ways. By utilizing the out-of-the-box Skype experience without any additional development required, thyssenkrupp’s 24,000 service engineers can now do their jobs safer and more efficiently. Triaging service requests ahead of the visit and getting hands-free remote holographic guidance when on site has reduced the average length of thyssenkrupp’s service calls by up to 4x.”

The launch of HoloLens and MAX is timely given that global revenues from elevator-related services are forecast to rise 4.9 percent per annum through 2019 to $US 56.3 billion.[2] In this regard, Andreas Schierenbeck noted: “Rapid urbanization across the globe means that our cities are getting bigger and taller, making it essential to tap into the power of technology to reduce overcrowding and move people in the most efficient way possible. By harnessing the power of IoT with solutions like MAX and HoloLens, thyssenkrupp is able to step further into the digital era and transform the way the elevator industry offers maintenance services.”

Launched by thyssenkrupp in 2015 as the industry’s first predictive maintenance solution, MAX is already connected with thousands of units in the pilot countries of US, Germany and Spain, and is on track to be connected with 180,000 units by the end of 2017. The successful implementation in the pilot countries has also set the stage for rollouts in additional countries by the end of 2016.

Iconic buildings whose elevators are already cloud-connected through MAX include the One World Trade Center. The building has elevators that travel faster than Usain Bolt, capable of moving from the ground floor to the 102nd floor in just 60 seconds, and regenerative drives that convert energy produced when elevators decelerate into electricity that can be used to significantly reduce the building’s energy consumption. Now equipped with MAX and HoloLens, the tower is setting new standards for sustainability and building efficiency.

HoloLens and MAX follow hot off the heels of several other technological innovations from thyssenkrupp, including TWIN, with two elevator cabins per shaft providing up to 30% higher transport capacity and 27% less energy consumption; MULTI, an elevator that moves horizontally as well as vertically, providing a 50% increase in transport capacity and a reduced elevator footprint in buildings; and ACCEL, a moving walkway that uses linear magnetic technology to reach speeds of up to 12km/h.

thyssenkrupp is a diversified industrial group with traditional strengths in materials and a growing share of capital goods and services businesses. Around 155,000 employees in nearly 80 countries work with passion and technological expertise to develop high-quality products and intelligent industrial processes and services for sustainable progress. Their skills and commitment are the basis of our success. In fiscal year 2014/2015 thyssenkrupp generated sales of around €43 billion.