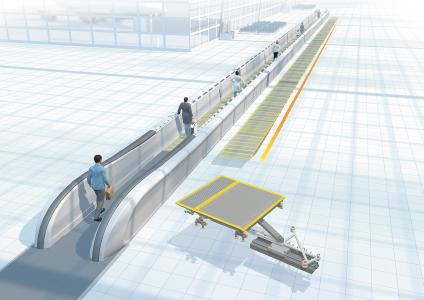 (PresseBox) ( Essen, 17-02-10 )
.
At the 11th Cumbre de Cotec Europa, an event hosted by the Cotec Foundation, thyssenkrupp supported the organization’s vision for a sustainable model for our economy and production systems. Together with several European partners the company has already developed various products aimed at reducing waste and energy consumption in cities, where the largest amount of energy is consumed.

This event was the first summit of European heads of state centered on the theme of a circular economy. The Cotec Foundation provided the attendees with its first report addressing this subject in Spain, and noted that innovation should be the key transition element with institutions and companies taking a leading role. Last month thyssenkrupp joined the ranks of the Foundation’s trustees, enabling it to contribute to an event tailored to the promotion of a circular economy model.

The King of Spain Felipe VI chaired the event together with the President of the Italian Republic, Sergio Mattarella; the President of the of the Portuguese Republic; Marcelo Rebelo de Sousa; the European Commissioner of Research, Science and Innovation, Carlos Moedas; and the Director-General for Environment of the European Commission, Daniel Calleja, along with stakeholders of the circular economy vision from the three participating countries.

thyssenkrupp is already developing solutions that will help cities adapt to a new model, because buildings today are the biggest consumers of energy, accounting for 40% of the energy consumed worldwide. Innovations like TWIN, consuming 30% less energy than traditional elevators, or MULTI, which needs 50% less floor space than existing high-rise elevators, will be key to designing sustainable cities. In this regard, thyssenkrupp believes Cotec’s pan-European alliances actively advance the development of sustainability-oriented innovations, thereby promoting the transition to a new economy model.

Javier Sesma, General Manager of thyssenkrupp Elevator’s Innovation Center in Gijon emphasizes: “thyssenkrupp is committed to the principles of a circular economy in all its business areas. We are a part of the selective group that is included in the global “Climate A List” by the non-profit organization CDP (formerly the Carbon Disclosure Project) which recognizes the world’s leading companies in terms of climate protection.”

Sesma highlights that “At its Global Research & Development (R&D) Center in Gijon, thyssenkrupp applies eco-design standards and lifecycle assessment analysis in all segments of the Circle of Value. Innovations generated from Spain include the iwalk, which uses 40% fewer components than traditional moving walkways and occupies 60% less space; and the accelerated moving walkway ACCEL, capable of transporting more than 7,000 people per hour at an average speed similar to an urban bus system, and is poised to change the way people will commute in cities.”

thyssenkrupp Elevator has a significant R&D presence in Spain with its innovation center in Gijon, Asturias. In addition, the company also has three manufacturing centers and a total of 5,000 employees in the country.

The Cotec Foundation has about 80 patrons, including private companies and regional and local administrations, and His Majesty King Felipe VI is the Honorary President. Cotec Italia has also been operating since 2001 and in 2003, Cotec Portugal was formed. From the start, Cotec has distinguished itself through its focused work on technological innovations amongst Spanish companies. To carry out this mission, Cotec focuses on two main activities: serving as a facilitator for research, development and innovation in Spain, and providing analysis and advice on innovation, technology and economics.

thyssenkrupp is a diversified industrial group with traditional strengths in materials and a growing share of capital goods and service businesses. Over 156,000 employees in nearly 80 countries work with passion and technological know-how to develop high-quality products and intelligent industrial processes and services for sustainable progress. Their skills and commitment are the basis of our success. In fiscal year 2015/2016 thyssenkrupp generated sales of around €39 billion.

Together with our customers we develop competitive solutions for current and future challenges in their respective industries. With our engineering expertise we enable our customers to gain an edge in the global market and manufacture innovative products in a cost- and resource-friendly way. Our technologies and innovations are the key to meeting diverse customer and market requirements around the world, growing on the markets of the future, and generating strong and stable earnings, cash flows and value growth.

thyssenkrupp Elevator brings together the Group's global activities in passenger transportation systems. With sales of €7.5 billion in fiscal 2015/2016 and customers in 150 countries, thyssenkrupp Elevator built its position as one of the world's leading elevator companies from scratch in a mere 40 years' time applying thyssenkrupp unique engineering capabilities. With more than 50,000 highly skilled employees, the company offers smart and innovative products and services designed to meet customers' individual requirements. The portfolio includes passenger and freight elevators, escalators and moving walks, passenger boarding bridges, stair and platform lifts as well as tailored service solutions for all products. Over 900 locations around the world provide an extensive sales and service network to guarantee closeness to customers.