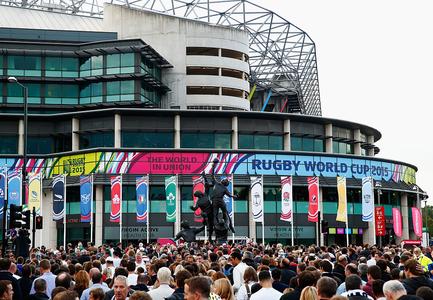 (PresseBox) ( Essen, 16-01-14 )
2015 was a great year for sport but perhaps a key highlight was the Rugby World Cup that had the world truly gripped. The tournament has been hailed as the “biggest and best” in the 28-year history of the tournament. More than 1.5 million supporters, a record, have visited fan zones across the country with a further million involved in the ‘Festival of Rugby’ activities.

During the World Cup which saw ten captivating matches hosted at Twickenham Stadium, the Home of England Rugby, some 800,000 fans attended to show their support and cheer on their teams.

While some were victorious, and others fell, all spectators went away with unforgettable experiences and enjoyed the great service and atmosphere created and delivered at Twickenham.

thyssenkrupp Elevator was proud to have played a part in bringing fans to the heart of the action, and keeping them moving to improve the flow, comfort and safety of rugby fans in the stadium.

In total thyssenkrupp supplied nine elevators at Twickenham staffed by two engineers for each game. These service engineer teams organized by Ian Kettridge, Repairs Department Supervisor, were on hand for ten events in total working from noon until midnight to ensure fans were transported around the stadium safely.

Michael Burns, a thyssenkrupp engineers said “although we were not able to watch the games themselves, you could really feel the atmosphere around the stadium was buzzing and that was great to be part of.”

Wilhelm Nehring, CEO of thyssenkrupp Elevator UK added “The Rugby World Cup 2015 was a tremendous sporting event that really had the world on the edge of their seats. We were proud to have played a part in giving fans a top experience when at Twickenham, with our world class elevators to keep them moving and on time during their visit. Not only were fans transported smoothly around the Stadium, our leading energy efficient technologies also helped reduce energy usage too resulting in significant costs savings - so a win win for all.”

thyssenkrupp is a diversified industrial group with traditional strengths in materials and a growing share of capital goods and services businesses. Around 155,000 employees in nearly 80 countries work with passion and technological expertise to develop high-quality products and intelligent industrial processes and services for sustainable progress. Their skills and commitment are the basis of our success. In fiscal year 2014/2015 thyssenkrupp generated sales of around €43 billion.