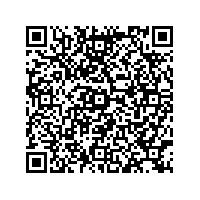 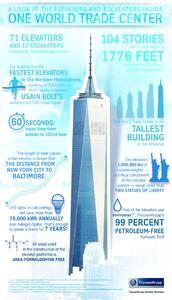 (PresseBox) ( Essen, 15-06-01 )
ThyssenKrupp has installed the fastest elevators in North and South America at One World Trade Center in New York. The technology group also supplied stainless steel for the spire of the tower.

The five elevators servicing the observatory, which has been opened today, represent a significant engineering feat, are able to travel at nearly 23 mph and climbing to the 102nd floor in just 60 seconds. At this speed, the elevators nearly outpace Usain Bolt's world-record 100-meter sprint.

The materials for the spire of the One World Trade center was supplied by Ken-Mac Metals, a US-based affiliate of ThyssenKrupp. The top weighs about 6.3 metric tons. AIN Plastics, another US affiliate delivered special plastic boxes which protect the roots of 500 trees at the foot of the building. Planning for the key elevator components including cabins, motors, cables, four million pounds of rails and complex software was done by a network of experts from eight countries.

ThyssenKrupp also designed and installed all of the elevators and escalators throughout the building. The elevator system provides energy conservation to the building. LED lights in cab ceilings will save more than 78,000 kilowatt-hours annually versus halogen bulbs, which is equivalent to fully powering an average U.S. home for more than seven years. Regenerative drives will recapture elevator energy and return it to the building's electrical system.

The elevators employ ThyssenKrupp Elevator's Destination Dispatch™ technology, which uses intelligent software and kiosks to group people on to elevators to move them to their destination the fastest. Altogether, ThyssenKrupp installed 71 elevators and 12 escalators into One World Trade Center.

"Working on this iconic project makes us all very proud at ThyssenKrupp," said Andreas Schierenbeck, CEO of ThyssenKrupp Elevator. "As a global diversified industrial company, we always leverage the best expertise we have from the various regions. The advanced high-speed elevators of the One World Trade Center are such an example with contributions from USA, Brazil, Canada, China, Germany, Italy, South Korea and Switzerland. Joseph Gurney, Vice President Stainless in ThyssenKrupp Materials North America, adds "This assignment was very special for us. We are proud that our know-how and technique was put into action for the OWTC."

The One World Trade Center measures 1.776 feet to the top of the stainless steel spire. This number has historical significance and symbolizes the birth year of the United States. The building is not only the highest building in the US, but also the fourth highest in the world.

ThyssenKrupp is a diversified industrial group with traditional strengths in materials and a growing share of capital goods and services businesses. Around 155,000 employees in nearly 80 countries work with passion and technological expertise to develop high-quality products and intelligent industrial processes and services for sustainable progress. Their skills and commitment are the basis of our success. In fiscal year 2013/2014 ThyssenKrupp generated sales of around €41 billion.

With our engineering expertise in the areas Mechanical, Plant and Materials we enable our customers to gain an edge in the global market and manufacture innovative products in a cost- and resource-friendly way. For us, technical progress and innovations, allied with the combined strength of the Group, are key factors enabling us to follow the development trends on the global sales markets, grow on the markets of the future, and generate strong and stable earnings, cash flows and value growth.