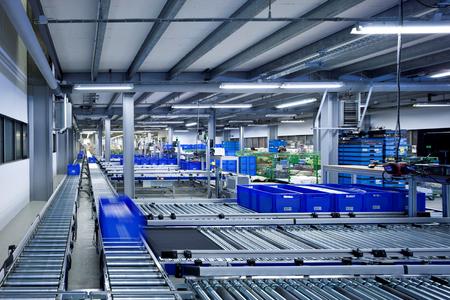 (PresseBox) ( Wels, 11-07-13 )
Top-quality terry products from Möve-Frottana are highly sought after by consumers. To ensure that supply can match growing demand from both stores and the company's online business, Möve-Frottana has implemented an automatic warehousing and picking system. KONLOG planned and supervised the project which was realised by general contractor TGW. The textile company has thus reduced picking costs by 70%.

Möve-Frottana stands for lush terry products, bed linens and accessories for the bedroom and bathroom. The high quality of the products and the active expansion strategy ensured that the company, which is headquartered in Großschönau (Saxony, Germany), has registered a 30 per cent growth in the last five years, despite the general economic crisis. The decision to start selling the products in the company's own stores as well as in online brand shops continues to generate further growth.

Due to the general growth, especially in orders from the online business and company stores, in 2008, Möve-Frottana decided to completely reinvent the warehousing and picking processes. Together with KONLOG, a planning company from Hamburg, the logistics figures and specifications were analysed in detail before several rounds of discussions produced a new custom logistics solution for Möve-Frottana. At all times, the partners kept in mind the expected continued growth of the company and the need to create a solution with reserve capacities.

The optimal solution for Möve-Frottana was an automation-assisted picking system replenished from an automated warehouse. The solution for implementation offered by TGW impressed both the textile manufacturer and the logistics planner, which is why the Austrian systems provider was comissioned as a general contractor. "TGW simply offered the best value for money," Matthias Kretzschmer says. The Managing Director of Frottana Textil GmbH & Co. KG adds: "We also liked the fact that TGW had several impressive references from the apparel sector."

Previously, towels, bed linens and accessories from Möve-Frottana - around 6,000 different articles in total - were stored in mobile pallet cages on a large surface area. Employees had to walk from one picking position to the next, collecting the goods according to paper-based picking lists. It was a process which required too much space and time. The new system offers a central, fully automated warehouse with more than 17,000 tote locations. The goods totes are brought to ergonomic workstations where the pickers collect the quantity indicated on the screen. The next item waits in line to be picked. Kretzschmer goes on: "According to our calculations, we should be able to reduce the time and effort spent on picking by around 70 per cent." This means that the existing workforce will be well-equipped to handle future growth. What is more, floor space is freed up for an expansion of production.

"The system is ideal for handling small orders, because we are able to pick small quantities and prepare them for despatch immediately. In the afternoon, they are collected by the parcel service", says Karin Kroschwald who is Shipping Manager and also responsible for the new logistics system. Such small orders come mostly from the online business where people often order just a couple of items. Depending on when the order is received, the product will arrive on the customer's doorstep the very next day. It is above all this area where the textile manufacturer sees potential for future expansion. However, Möve-Frottana doesn't just operate the sites www.moeve.com and www.frottana.com; online shop orders from trade partners are also picked, packaged and despatched in Großschönau.

The terry specialist's second large growth area comprises the 28 brand stores currently operating under its own name and more than 100 shops-in-shops in large department stores. Möve-Frottana has complete control of stocks and sales in this distribution channel and supplies the business on a weekly basis. Orders are handled in an automated system and picked by the new logistics solution in Großschönau.

In addition, the company supplies trade partners who offer the Möve and Frottana brands as part of their store ranges. Möve-Frottana even produces and markets private label products. This area of business, which the textile manufacturer refers to as "Professional", includes promotional products for industrial customers and bedding and bathroom supplies for hotels. This area has experienced a boom recently, since the company commissioned a world novelty two years ago: a digital printing machine with top-of-the-line printing results on terry products.

Orders of all sizes and seasonal variation

All in all, the company produces around 5 million terry towels and 70,000 bathrobes every year which are all handled by the new logistics solution. The different business areas generate many different order sizes, ranging from individual items to complete truck loads. Seasonal variation in order volumes used to make logistics quite the challenge in the past. From September to January, the turnover is usually 50 to 100 per cent larger than the annual average. At the same time, punctual deliveries are vital.

"After all, supplying the market quickly is the alpha and omega of the business. Naturally, our aim with the new system was to become much faster and more flexible", Frottana's Managing Director says. This increase in efficiency was achieved in two ways: on the one hand, by introducing shorter picking routes with the goods-to-person system; on the other hand, by completely integrating the logistics software CI_LOG in Möve-Frottana's existing ERP system. Thanks to close cooperation between the in-house IT department and the experts from TGW, it was possible to carry out this integration without affecting the day-to-day operations in any way.

This was one of the greatest challenges of the project. Everything had to take place side by side with normal operations without causing the customers any inconveniences. In the end, neither the construction of the new building for the 5-aisle automated warehouse, nor the renovation of the old building and the temporary move to other areas of the 20,000 m² large block of buildings was enough to put the logistics team of 40 around Mrs Kroschwald off balance. Not even in light of the significant construction delay caused by massive flooding in the summer of 2010. Despite such difficulties, the project was finished to complete satisfaction and on schedule.

Efficient use of renewable energy

Möve-Frottana's new logistics facility is not only used for storing goods - it also generates electricity! The solar panels on the roof of the warehouse building supply the company with 30,000 kWh annually, which corresponds to the annual consumption of approx. 10 households. Even when choosing the storage system, the environment was given high priority. For example, the five Mustang AS/RS handling machines by TGW are equipped with energy recovery modules which reduce the energy consumption by well over 15 per cent. The braking energy released is not emitted as heat, but instead transformed into electricity and reused in other parts of the system.

Möve-Frottana has used the new logistics system in everyday operations since May 2011. Thanks to the straightforward process design and an intuitive user interface, the employees were able to get familiar with the new system in no time. They were also helped and guided intensively by a core team trained by TGW. "We even sent mechanics and electricians to the TGW training sessions, so that we will be able to fully service the entire system", says Karin Kroschwald. "I think we will have very few problems in this respect."

This investment in a new warehousing and picking solution means that Möve-Frottana is optimally equipped to handle the expected growth over the next few years. "The system is designed to enable us to work efficiently here for at least the next five years. I have no doubt that it will be sufficient", says Matthias Kretzschmer. Just in case the business grows more than expected, enough space has been allocated for future expansion.

The companies of TGW Logistics Group can look back on a successful development. With more 1,100 employees worldwide by now, the Group implements logistics solutions for leading companies in various sectors. In the business year 2009/10, the TGW Logistics Group generated sales revenues of 221.5 million Euros.