Subscribe to news
(PresseBox) ( Bayrampasa / Istanbul, 19-09-16 )
Tezmaksan, Turkey representative of German Röders company and Mitsubishi Germany, attends EMO Hannover Fair with two new products that are designed and produced by themselves. Cubebox product, which will be promoted for the first time at the fair, allows factories to work without an operator for 24 hours. Kapasitematik ensures machines to talk with operators for 7 days 24 hours and gives permission for intervention from any place with an internet connection. First distributorship agreements regarding two products are expected to be made during the fair.

Tezmaksan, who worked as distributor of Röders, a German brand, for many years, while acting as the representative of Germany Mitsubishi Electric at the same time for many years, will attend EMO Hannover Fair with its new products that are designed and developed by themselves called Cubebox and Kapasitematik in order to increase production efficiency. The sale of products, which will be promoted at EMO Hannover that is considered as the leader commercial organization of the world in metal processing sector, in Europe will begin in 2020. Tezmaksan, which is in communication with many brands, is expected to realize first distributorship agreements at the fair. The sales target of the brand for Cubebox for the first year is 5 million Euros, while this number has been announced as 1 million Euros for Kapasitematik.

Tekmaksan aims to have a voice in the world with these two new products that increase efficiency. Cubebox, which is designed by R&D center, increases the speed of production in machinery – operator cooperation at smart factories. Cubebox offers operator-free and failure-free working system to companies for 24 hours. Cubebox, which ensures 50% efficiency to companies especially for night shifts, draws attention with its accordance to all CNC machines with its standard structure. The software, which is 20+ more affordable priced compared to robot systems special for companies, can be installed and activated within only a day. Moreover, part change can be made without requiring robot programming knowledge with this system. Tezmaksan aims an annual system export of 5 million Euros to Europe with Cubebox.

Kapasitematik is developed as a production monitoring software and allows machinery and operators to work 7 days 24 hours. Kapasitematik, which increases operational efficiency, allows corporation to make intervention without losing time as it notifies the failure of machinery in advance. Key data of machinery are collected in a center and this data is turned into a report by remote access with this project, which may be thought within the scope of Industry 4.0. Thanks to ‘Kapasitematik’, which is a remote monitoring and efficiency reporting system, CNC operators and enterprises can see measurable and historical trend analyses of their machines. Such a study, which can be a problem for an enterprise both in financial and timing terms under normal conditions, can be completed and monitored with a single click with Kapasitematik. The annual sale aimed with Kapasitematik has been declared as 1 million Euros.

“We must keep pace with developing technology”

TEZMAKSAN General Manager Hakan Aydoğdu, stating that many modern technologies like AI, IIOT will become indispensable parts of production tracks with the digital transformation, said “human – machinery cooperation, mobile systems and smart robots have become important parts of the digitalization of manufacturing industry. As brand, we wish to be one of the important actors of this new era while changing the working type and increasing efficiency in the world. For this purpose, we increase our R&D studies in order to make machinery smarter. We shall put our signature under important agreements over these two products at EMO Hannover Fair, we’ve started to establish out dealership network.” 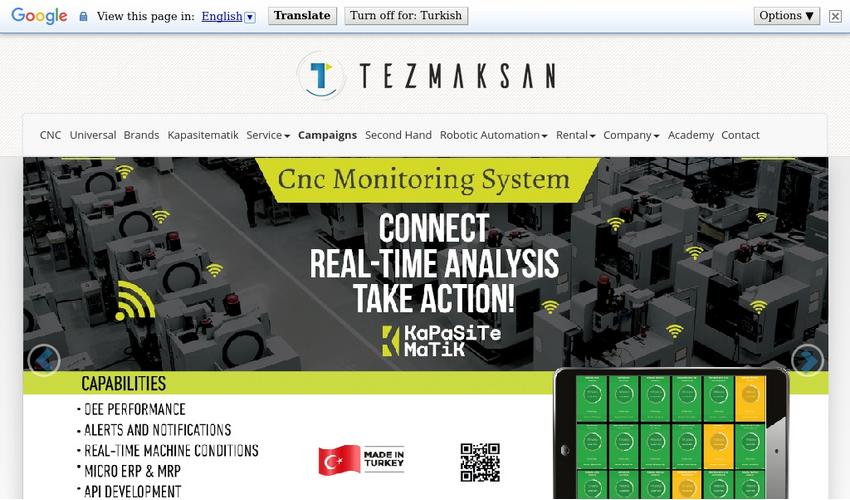