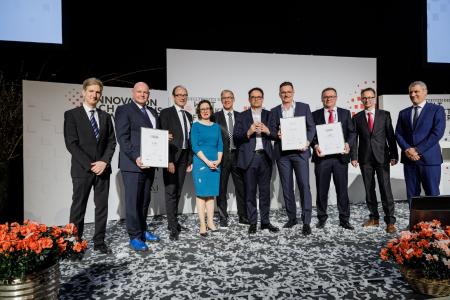 (PresseBox) ( Ilsfeld, 20-02-10 )
Jürgen Pfitzer and Helmut Nägele, both CEO`s of TECNARO, have just been honoured at the summit of the world market leaders for the innovative development of their biomaterials ARBOFORM®, ARBOBLEND® and ARBOFILL®. The 2nd prize for the first-ever “Innovation Champions Award”, is dedicated to a company which produces bio-compounds based on renewable raw materials such as lignin, starch, sugar, cellulose, etc. to meet the highest requirements in a wide range of applications.

The products of TECNARO Company for the industrial application of renewable raw materials mbH in Ilsfeld, Württemberg, thus make an important contribution to defusing the global climate and environmental debate and to maintaining the existing plastics technology for the post-oil era.

The prize was presented by the editor-in-chief Beat Balzli, Varinia Bernau and Kristin Rau of the Wirtschaftswoche, and by Dr. Walter Döring, former Minister of Economics of Baden-Württemberg and founder of the academy of world market leaders, which hosted the summit meeting in Schwäbisch Hall for the 10th time.

The highlight of the two-day summit meeting was the fulminant concert of the Würth Philharmonic Orchestra in the course of the gala dinner and the award ceremony at the Carmen Würth Forum in Künzelsau.

Künzelsau is the center of the Hohenlohe district which, according to a study by Prof. Dr. Bernd Venohr, is home to the most world market leaders in relation to the number of inhabitants.

Jürgen Pfitzer and Helmut Nägele are highly impressed by the classy event. "We are very pleased to receive this award as an outstanding assessment of our efforts, which have been ongoing for over 20 years, to substitute petroleum-based plastics at least equivalent with our plant-based and almost CO2-neutral bioplastics: ARBOFORM®, ARBOBLEND® and ARBOFILL®," say the two managing partners of TECNARO GmbH.

The CEO evening at the beginning and the two-day summit meeting of the world market leaders was packed with outstanding presentations by top politicians, top sportsmen and women and outstanding business personalities, all of whom united in one common goal:

All of them are real go-getters and valuable encouragers!

Further information is available at: https://www.weltmarktfuehrer-gipfel.de/Referenten.php