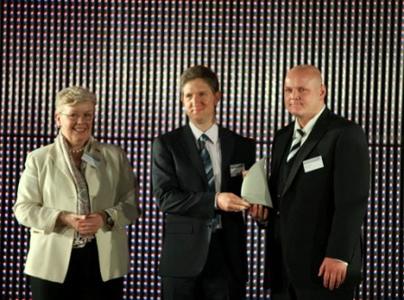 (PresseBox) ( Madrid/Ilsfeld-Auenstein, 10-05-04 )
TECNARO GmbH located in Ilsfeld near Heilbronn is very happy about winning one of the most prestigious international awards, the European Inventor Award. The two managing directors of TECNARO GmbH, Jürgen Pfitzer and Helmut Nägele, were proposed by international patent examiners and nominated from among more than 1,000 inventors and patent applicants for the European Inventor Award 2010, awarded annually by the EU Commission and the European Patent Office. On April 28th a high level jury has chosen Tecnaro. The award was handed over in Madrid by Alison Brimelow, President of the European Patent Office for the invention of ARBOFORM, an environmentally friendly material replacing petroleumbased plastics in many industrial applications and offering further significant advantages for example being biodegradable and pleasant to handle as a finished product (wood). Awarded are inventors and inventions which contribute significantly and sustainable to technical progress and due to this to the increase in European economy. Key factors were innovation, already achieved success in the market and future potential. Prince Felipe und Princess Letizia, heir apparents from Spain patronized the award in 2010 and congratulated the winners.

Among previous awardees are outstanding personalities such as Adolf Goetz Berger (2009), the "father" of solar technology, Nobel Prize winner in Physics Peter Grünberg (2006), AIDS researcher Eric De Clercq (2008) and Federico Faggin (2006), the inventor of the micro-processor.

The initials of TEChnologie NAchwachsender ROhstoffe (Technology of renewable resources) represent the company's name "TECNARO". Twelve years ago the company was established by Helmut Nägele from Karlsruhe and Jürgen Pfitzer from Ellwangen after their development of the brandnew material "ARBOFORM" at the Fraunhofer Institute. This biopolymer material offers the same processing qualities and features as plastic. ARBOFORM, however, is based on lignin, (a major component of wood), various natural fibers such as hemp and flax as well as natural additives. Besides cellulose, the wood component lignin is the second most common organic material on earth, about 20 billion tons of lignin being formed each year by photosynthesis. This ensures an almost infinite supply of lignin as a raw material without competing with food products. Approximately 60 million tons of lignin are produced annually as a byproduct within the Cellulose industry, mainly in the production of paper. Lignin may even be extracted from tree bark, sawdust or straw. The mixture of renewable resources is processed further through special procedures to form granules which can be used for various products manufactured by conventional plastic fabrication techniques.

This thermoplastic material offers not only technical and economical advantages but also tremendous ecological benefits. With ARBOFORM, industry gains independence from petroleum as a raw material, it can easily be recycled, and even composted or burnt without releasing additional CO2. This explains the very strong interest within the plastic and wood processing industry in ARBOFORM. Particularly the automotive industry is fascinated by this new environmentally friendly material: ARBOFORM looks like wood, it feels like wood, but can nevertheless be processed easily into a wide variety of threedimensional shapes, e.g. for car interior design. Companies involved in the packaging business as well as manufacturers of furniture, toys, shoes and music instruments have become established users of the material. TECNARO is convinced that its product will have a significant future impact on many other industries and will conquer additional international markets also due to the new partnership with Albis Plastic GmbH.

The demand for ARBOFORM and TECNAROs' other products ARBOBLEND and ARBOFILL is growing continuously, primarily because of the product's environmental friendliness, and secondly because of their competitive prices. This success is also reflected by the increasing number of technical staff.