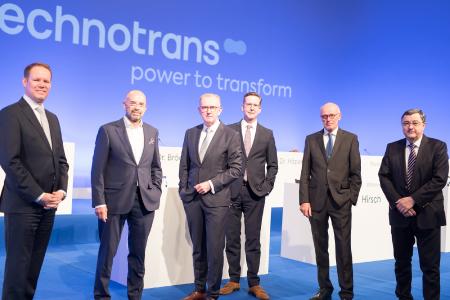 (PresseBox) ( Sassenberg, 21-05-07 )
technotrans SE will distribute a dividend of € 0.36 per share to its shareholders this year - this was decided at today's Annual General Meeting, which was again held virtually via live stream. In addition, the shareholders elected two new members to the Supervisory Board, Dr-Ing Gottfried H. Dutiné and Dipl-Ing Peter Baumgartner. In their speeches, the technotrans Board of Management members expressed satisfaction with the course of the 2020 financial year in view of the continuing pandemic-related challenges. According to the Board of Management, the measures initiated in December as part of the "Future Ready 2025" strategy are already showing initial success. This is evidenced by the positive business performance in the first quarter of 2021 as well as growing momentum in the target markets. The Board of Management also confirmed the forecast for the current business year.

"Despite the adverse circumstances, the group has coped well with the challenges of the pandemic. With a comprehensive package of measures, we have succeeded in protecting the health of our employees in the best possible way and safeguarding business operations at all times", says Michael Finger, Spokesman of the Board of Management of technotrans SE. After the company had not distributed a dividend last year, a profit participation of € 0.36 per no-par share was decided at this year's Annual General Meeting.

The term of office of two Supervisory Board members ended at the end of the Annual General Meeting: Heinz Harling resigned as a member of the Supervisory Board after more than 40 years of service in various functions at technotrans, including twelve years as Chairman of the Supervisory Board. Dr Wolfgang Höper was no longer available for re-election as a shareholder representative on the Supervisory Board of technotrans SE. The majority of the Annual General Meeting elected Dr-Ing Gottfried H. Dutiné and Dipl.-Ing. Peter Baumgartner to the Supervisory Board. Dr Dutiné has many years of experience and knowledge in the areas of technology management, corporate strategy, new business development and restructuring, among others. He is currently a member of VDE, Münchner Kreis, Finance Experts Association (FEA) and Aufsichtsräte Mittelstand Deutschland e.V. (ArMID). Peter Baumgartner has held management positions in international consulting, private equity and industrial companies for 40 years. His experience includes the development and implementation of complex restructuring, strategy, M&A and corporate governance projects in various industries in Europe, Asia and the Americas. He will take over the chairmanship of the Supervisory Board in the future.

In addition, CFO Dirk Engel, whose contract ends on July 31, 2021, said goodbye to the shareholders. "I have enjoyed helping to shape technotrans as CFO over the past fifteen years. I would like to sincerely thank all those who have placed their trust in me during this time", says Dirk Engel.

"Our diversified market, technology and product portfolio enabled us to achieve a respectable performance in the 2020 financial year under the given circumstances. Our starting position is good. The strong result in the first quarter of 2021 shows that the path we have chosen is the right one," emphasises Michael Finger. In the first three months, technotrans posted consolidated revenue of € 52.8 million. With the increase of 1.3 % compared to the same period of the previous year, this even exceeded the pre-Corona level.

According to the technotrans Board of Management, this success is also attributable to the strategic realignment "Future Ready 2025" launched at the end of 2020, which is intended to increase the technological clout of the entire group by pooling skills. Part of this strategy involves merging the individual companies to form the technotrans umbrella brand and focusing on selected target markets. The Group has set up internal project teams that are working on the merger of the companies gwk and Reisner as well as KLH and technotrans SE. In addition, the Group recently booked two major orders with a seven-figure volume for the target industries Plastics and Energy Management. Among other things, the Meinerzhagen site supplies a central deep-freeze system to a well-known manufacturer of lithium-ion batteries for use in electric cars.

"technotrans will be even more powerful and efficient in the coming years by pooling all its strengths," says Michael Finger. "The course for a successful future has been set and the restructuring measures are already taking effect. We know exactly where we are at the moment and what steps we will take next." The Board of Management also confirmed its forecast for the 2021 financial year with consolidated revenue of € 195 to 205 million and an EBIT margin of between 4.5 and 5.5 %.

technotrans SE is a global technology and service group with its headquarters in Sassenberg in the German Münsterland region. Its application-specific thermal management solutions are the core competence of the company. This also includes the energetic optimisation and control of the temperature of sophisticated technological applications. With 17 sites, the company has a presence in all the major markets worldwide. technotrans SE is among others active in the sectors plastics, energy management (including e-mobility, high power charging stations and data centres), healthcare & analytics, print as well as the laser & machine tool industry. In addition, technotrans offers a wide range of services including, for example, construction site installations, maintenance, repairs and 24/7 spare parts supply. As of 2021, the individual companies of the group - technotrans SE, gwk Gesellschaft für Wärme Kältetechnik mbH, termotek GmbH, klh Kältetechnik GmbH and Reisner Cooling Solutions GmbH - are unified under the technotrans umbrella brand. An exception is gds GmbH, with its headquarters in Sassenberg, as a full-service supplier of technical documentation services which will remain a separate brand within the Group of companies. technotrans SE is listed on the Prime Standard segment (ISIN: DE000A0XYGA7 / WKN: A0X YGA) and has a global workforce of more than 1,400 employees. In the 2020 financial year, the Group generated a turnover of € 190.5 million.

Efficient and compact: first presentation of cooling and temperature control solutions made by technotrans at the CMEF in China