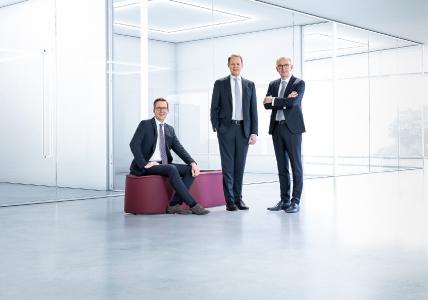 (PresseBox) ( Sassenberg, 21-03-09 )
technotrans SE has successfully completed the 2020 financial year, which was impacted by an unprecedented pandemic-related slump in the global economy. Thanks to an increasing diversification of markets and a stable business development in the fourth quarter, the company achieved group revenue of € 190.5 million. The decline of 8.4 percent compared to the previous year was moderate. With a group operating profit (EBIT) of € 6.8 million, the thermal management specialist remained profitable and achieved an EBIT margin of 3.6 percent (previous year: 4.0 percent). With the exception of consolidated revenue, technotrans even achieved its original annual forecast of April 2020, which was withdrawn due to corona. The expectations last communicated in autumn were exceeded.

"technotrans has achieved a respectable performance in the 2020 financial year under the difficult framework conditions. The Board of Management is therefore satisfied with the overall business performance despite lower revenue and operating result compared to the previous year," said Michael Finger, Spokesman of the Board of Management of technotrans SE, at the presentation of the Annual Report 2020.

Adjusted for one-time charges totalling € 2.6 million, the group generated an EBIT margin of 4.9 percent, which was above the previous year's figure of 4.7 percent. The consolidated net profit of € 5 million led to earnings per share (EPS) of € 0.72 (previous year: € 0.88).

The Board of Management consistently pursued measures to optimise the group even in an environment burdened by the pandemic. Under the guiding principle "Future Ready 2025", it set the strategic course for profitable growth in the coming years. The goals include revenue growth through a stronger focus on four selected target markets as well as a uniform group-wide appearance through the creation of the umbrella brand technotrans in order to strengthen the economic and technological clout of the entire group.

The Technology segment accounted for € 137.7 million of group revenue - 72 percent of the total. Despite the corona-related 7.2 percent decline in turnover compared to the previous year, a nearly balanced result was achieved. Before one-off effects (€ 2 million), the segment achieved an EBIT of € 1.8 million. This corresponds to an adjusted segment return of 1.3 percent.

The corona pandemic triggered significant travel and visitor restrictions. These had a particularly strong impact on the Services segment. With a decline of around 11 percent, segment revenue of € 52.8 million in the reporting period was significantly below the previous year. The profitability of the segment was robust, as expected, with a decline in the EBIT margin from 13.9 to 13.3 percent. Thus, a segment result (EBIT) of € 7.0 million was realised (previous year: € 8.3 million). Adjusted for one-time effects proportionately attributable to the Services business, the segment achieved a result of € 7.6 million with an earnings margin of 14.4 percent.

Strategic target markets stabilised in the course of the year

After the corona-related slump in the global economy in the first quarter, business in the newly defined strategic target markets of Plastics, Energy Management (including electromobility and data centres), Healthcare & Analytics and Print gradually stabilised over the course of the financial year. Promising contracts with a medium-term character were achieved in particular in the area of electromobility "rail". Here, technotrans substantially expanded its market position. As expected, business in the plastics processing industry was also positive. Revenue in this sector was even above the previous year's level.

The financial situation of the technotrans group remained solid and in order even during the corona crisis. Despite the construction of a completely new production plant in Holzwickede, total assets increased only moderately by 1.4 percent to € 148.1 million. The equity ratio increased to 53.6 percent (previous year: 51.4 percent). Net debt decreased from € 24.2 million to € 21.5 million, mainly due to the very good liquidity situation. The gearing ratio remained comfortable at 1.6 (net debt/EBITDA).

As part of the structural realignment, the number of employees in the technotrans group decreased by 4.4 percent compared to the previous year to 1,409 employees at the end of 2020.

The corona pandemic will continue to shape economic development in 2021. Therefore, the economic environment remains fragile and is characterised by a high degree of uncertainty. "The Board of Management will continue to consistently implement the adopted strategy 'Future Ready 2025' regardless of this environment. Stability and profitability are particular focal points of the strategic roadmap in the 2021 financial year," emphasises Michael Finger.

Regarding sales, the Board of Management expects continued pressure in the Print and Laser & Machine Tool Industry markets. However, the government economic stimulus programmes that have already been initiated can have a positive effect. This could create additional opportunities for technotrans in the Energy Management and Healthcare & Analytics divisions. Examples include the accelerated electrification of the transport sector and the expansion of healthcare systems.

The Board of Management confirms the guidance for 2021 published in December 2020, which envisages group revenue in a range of € 195 million to € 205 million and group operating profit (EBIT) between € 8.8 million and € 11.3 million. The EBIT margin is expected to range between 4.5 and 5.5 percent. The outlook is subject to the economic environment stabilising in the course of the year and no additional burdens arising from the corona pandemic. The medium-term forecast of a turnover in a range of € 265 to 285 million with an EBIT margin between 9 and 12 percent also remains valid.

Proposal of the appropriation of profit

The Board of Management and the Supervisory Board will propose to the virtual Annual General Meeting of technotrans SE on May 7, 2021 the distribution of a dividend of € 0.36 per share, which is half of the group's consolidated net profit for the year.

Election of two Supervisory Board members

Two new Supervisory Board members will also be elected at the Annual General Meeting.

The term of office of Dr Höper as a shareholder representative will expire by rotation at the end of this year's Annual General Meeting. He is no longer available for re-election.

Mr. Harling will also assist the new Supervisory Board members and the entire Board in an advisory capacity.

technotrans SE is a global technology and service group with its headquarters in Sassenberg in the German Münsterland region. Its application-specific thermal management solutions are the core competence of the company. This also includes the energetic optimisation and control of the temperature of sophisticated technological applications. With 17 sites, the company has a presence in all the major markets worldwide. technotrans SE is among others active in the sectors plastics, energy management (including e-mobility and data centres), healthcare & analytics, print as well as the laser & machine tool industry. In addition, technotrans offers a wide range of services including, for example, construction site installations, maintenance, repairs and 24/7 spare parts supply. As of 2021, the individual companies of the group – technotrans SE, gwk Gesellschaft für Wärme Kältetechnik mbH, termotek GmbH, klh Kältetechnik GmbH and Reisner Cooling Solutions GmbH – are unified under the technotrans umbrella brand. An exception is gds GmbH, with its headquarters in Sassenberg, as a full-service supplier of technical documentation services which will remain a separate brand within the group of companies. technotrans SE is listed on the Prime Standard segment (ISIN: DE000A0XYGA7 / WKN: A0X YGA) and has a global workforce of more than 1,400 employees. In the 2020 financial year, the group generated a turnover of € 190.5 million.